Defensive back Iman Marshall is one of the top recruits in the 2015 college football class. (YouTube)

The games are played in the fall, but the battles for the top players go year-round.

And Wednesday is National Signing Day, so we’ll find where the top recruits are headed.

Normally it’s the skill position players who garner the headlines, but 2015 is the year of the linemen.

Most of the top recruits are the big guys – defensive tackles, ends and road-grading offensive blockers.

Here are the top recruits in the 2015 class:

Beckner took an official visit to Missouri this past weekend, though National Champion Ohio State and Florida State are each making a serious push for the defensive end.

Missouri went all out during Beckner’s visit, hoping to land the 5-star recruit.

Beckner is scheduled to make his choice at 10:45 a.m. Eastern on ESPNU.

Cowart is widely considered the top prospect in the nation. In the mold of former South Carolina star Jadeveon Clowney, Cowart made visits to Florida and Auburn late last month and told ESPN those schools are his top 2 choices.

Former Gators coach Will Muschamp went after Cowart hard. Muschamp is no longer at Florida, but is now the defensive coordinator of Auburn.

Cowart is scheduled to make his choice at 9 a.m. Eastern on ESPNU.

Ivey has seemingly narrowed his choices to 2 schools. He told GatorCountry.com:

Ivey is scheduled to announce his decision during the 11 a.m. Eastern hour on ESPNU.

USC is considered the favorite, though Michigan and new coach Jim Harbaugh are making a late push.

He’s the top-rated defensive back in the class and has great size.

Marshall is scheduled to make his announcement at 4 p.m. Eastern on ESPNU.

Thompson verbally committed to Georgia last August, but he recently took an official visit to Auburn.

The run-stuffing yet agile Thompson was named the Junior of The Year by Rivals. 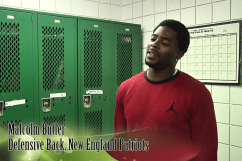