Well the first half of the round of 32 have punched their tickets after winning their opening round game on Thursday, March 19. The other 16 have yet to be determined, but will start filing in as the round of 64 in the March Madness 2015 Tournament continues Friday, March 20 in various arenas across the nation. There’s been plenty of upsets so far in the round of 64 of March Madness 2015, and there’s sure to be more on Day 2. One the games taking place on Day 2 in the East bracket is No. 4 Louisville vs. No. 13 UC Irvine.

A year removed from a Sweet 16 appearance, Louisville has had a rollercoaster season. But Cardinals’ head coach Rick Pitino has put his experience to use to put together a strong roster that’s looking to contend for that national championship. After getting a selection committee bid, Louisville is the No. 4 seed in the East region bracket and posts a 24-8, (12-6 ACC) record heading into tournament play.

The Cardinals will face-off against No. 13 UC Irvine in the round of 64.

The Anteaters pulled off an upset before March Madness even started – they won the Big West Conference Tournament to earn an automatic bid to the dance. At 21-12 (11-5), the Anteaters weren’t even on the bubble watch and now they’ll competing against Louisville in the round of 64.

The game starts at 4:10 p.m. Eastern and will be covered by TBS. The announcers for the game will be Spero Dedes, Mike Gminski and Jaime Maggio.

The winner between Louisville and UC Irvine will move on to face the winner of the No. 5 UNI vs. No. 12 Wyoming game. That game will take place on Sunday, March 22.

But before that happens, here’s how to watch Louisville vs. UC Irvine online and on mobile: 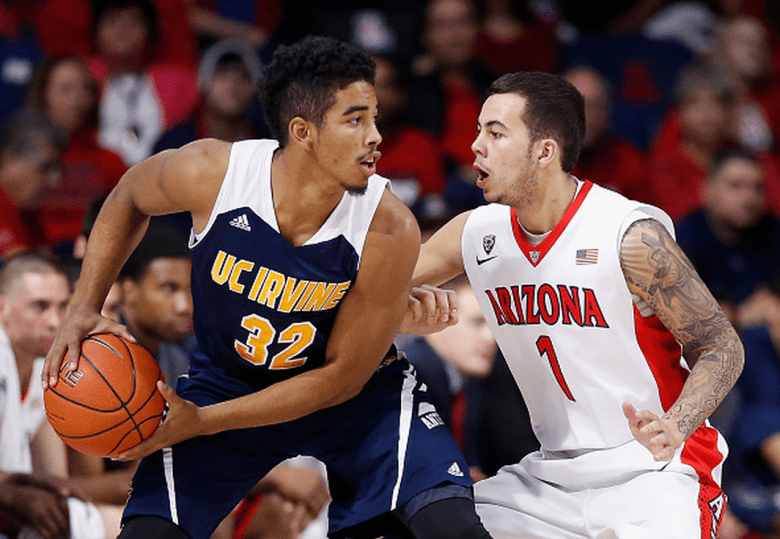 Aaron Wright #32 of the UC Irvine Anteaters looks to pass around Gabe York #1 of the Arizona Wildcats 1during the college basketball game at McKale Center on November 19, 2014 in Tucson, Arizona. The Wildcats defeated the Anteaters 71-54. (Getty)