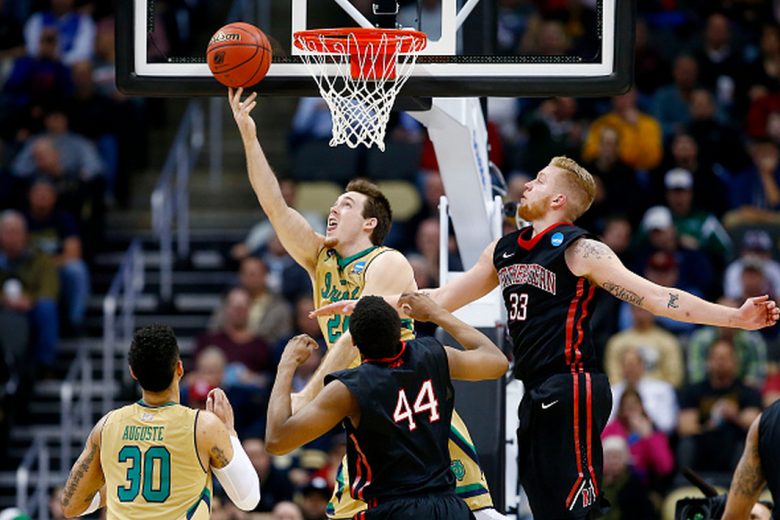 Pat Connaughton #24 of the Notre Dame Fighting Irish shoots against the defense of Zach Stahl #33 and Reggie Spencer #44 of the Northeastern Huskies in the second half during the second round of the 2015 NCAA Men’s Basketball Tournament at Consol Energy Center on March 19, 2015 in Pittsburgh, Pennsylvania. (Getty)

After two days of madness – literally – the round of 32 kicks off Saturday, March 21 in various arenas nationwide. It’s 16 games that will determine which teams will survive another week and move on to the Sweet 16. The second Midwest game of the day is No. 3 Notre Dame vs. No. 6 Butler.

And the stage has been set for an in-state rivalry matchup in the round of 32.

Notre Dame has continued its winning ways. After winning their first-ever ACC Tournament Championship, the Fighting Irish received the No. 3 seed in the Midwest region, which lined them up against No. 14 Northeastern in the round of 64.

Although it came down to the wire in Pittsburgh, Notre Dame prevailed to walk away with the 69-65 win. And with the victory, the Fighting Irish advance to the round of 32 to play in-state rival No. 6 Butler – as the Bulldogs routed No. 11 Texas, 56-48.

The Butler Bulldogs were one of the top Big East teams this season and finished out the regular season with a record of 22-10 overall and 12-6 in the Big East conference. Butler Head Coach Chris Holtmann is in his first year at the helm of the Bulldogs and will look to continue his success with the program.

The game starts at 9:40 p.m. Eastern and will be covered by TBS. The announcers for the game will be Brian Anderson, Steve Smith and Lewis Johnson.

The winner between Notre Dame and Butler will move on to face the winner of No. 2 Kansas vs. No. 7 Wichita State in the Sweet 16. That game will take place on Thursday, March 26.

But before that happens, here’s how to watch Notre Dame vs. Butler online and on mobile: 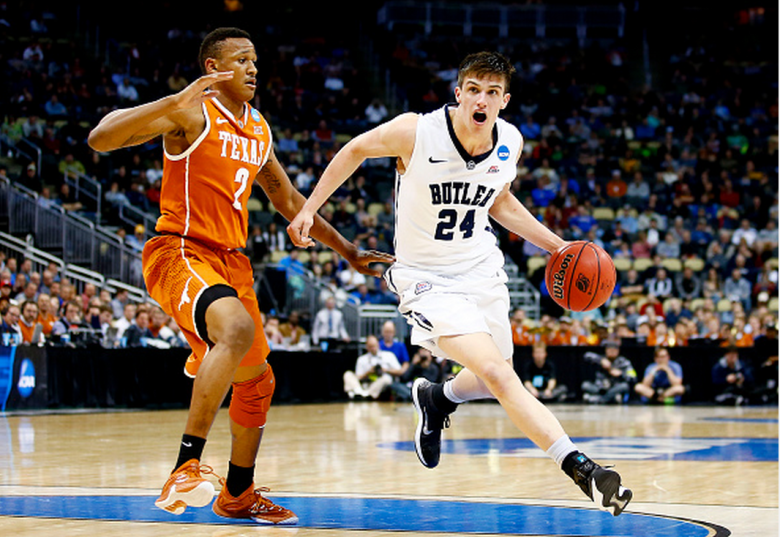 Kellen Dunham #24 of the Butler Bulldogs drives against Demarcus Holland #2 of the Texas Longhorns in the second half during the second round of the 2015 NCAA Men’s Basketball Tournament at Consol Energy Center on March 19, 2015 in Pittsburgh, Pennsylvania. (Getty)