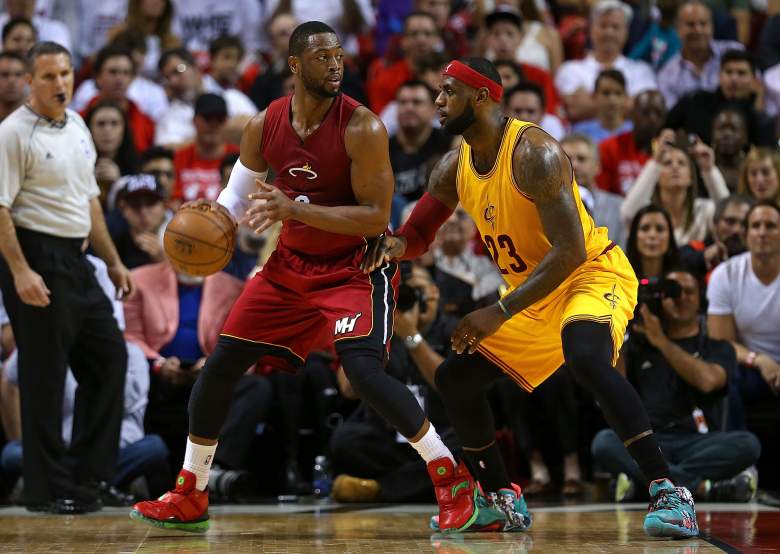 Dwyane Wade and LeBron James play Thursday night, but the old friends could meet again in the first round of the playoffs. (Getty)

Thursday is the last regular season game between the Miami Heat and Cleveland Cavaliers, aka LeBron vs. his old team, but that doesn’t mean it’s the last time they’ll play this season. The Cavs are close to being locked into the 2-seed, while the Heat have a battle for the 6th, 7th and 8th seeds. There’s plenty of turmoil surrounding the Cavs, including a one-point win against the 76ers in their last game in which they didn’t score in the final four minutes. Will they pick up their game against Dwayne Wade and the Heat?

LeBron and the Cavaliers Throw a Dunk Party vs. MiamiCheck out some of the best slams from LeBron James and the Cleveland Cavaliers as they host the Miami Heat. About the NBA: The NBA is the premier professional basketball league in the United States and Canada. The league is truly global, with games and programming in 215 countries and territories in 47 languages, as…2015-02-12T04:28:37.000Z

The Heat have showed up whenever LeBron and company travelled down to Miami, but it was a different case when they met in Cleveland in February with the Cavs winning by 20. The Heat are still competing for a playoff spot, but have really struggled against above average teams on the road. However, the Cavaliers haven’t really showed up in their last couple home games, barely getting by the Pacers and 76ers.

That should change with LeBron facing his former team. There are plenty of questions about the Cavs and their chemistry, but after a couple days of rest, should be ready to support LeBron and take down the Heat by a decent margin. The rest should also help Kevin Love, who is a game-time decision. And as of Thursday morning, Kyrie Irving and Wade were questionable due to illness. Keep an eye on their status. 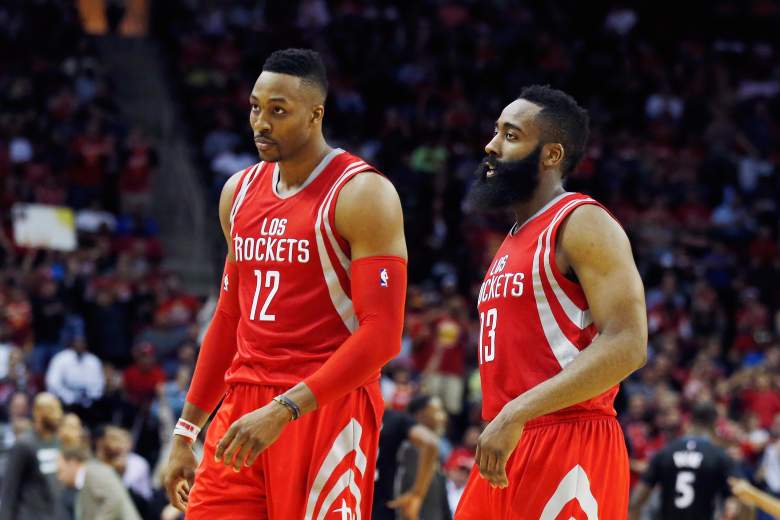 As Dwight Howard gets healthier, no one will want to see him alongside James Harden in the playoffs. (Getty)

Things aren’t getting any easier for the Mavericks with the Warriors next on the slate. They were on a bit of a losing streak, but scored 135 points in Oklahoma City last night and got a big road win. They’re back at home on Thursday. In the same situation a month ago (Dallas on back-to-back coming off road loss at OKC), the Mavs won 111-100 against Houston. Of course, Dwight Howard didn’t play in that game.

The Mavericks may have gotten that big win last night, but still have only covered in two of their last eight games and have a losing ATS record at home this season. James Harden dropped a ridiculous 51 points last night in a win against the Kings without Dwight Howard. Expect Howard to be back after a night off, giving the Rockets an edge.

The Warriors are the best home team in the league and they are on a 10-game winning streak, so of course this line is huge. There isn’t much going right for the Suns at the moment, as they have lost four straight, including a home game to Sacramento. The Suns are actually 19-15 ATS on the road, but that doesn’t compare to Golden State’s 25-10 ATS at home. The Warriors have won four straight home games by at least 15 points, meaning this line could be even higher. Not a lot of people will be taking Phoenix in this one. 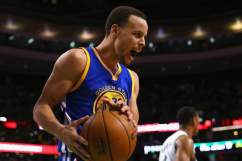 Read More
Basketball, NBA, Sports Betting
LeBron James takes on Dwyane Wade and his former team in Thursday night's NBA action. Can the Heat keep it close as a double-digit underdog in Cleveland?