English-born Amir Khan will be next in line for Floyd Mayweather, provided Money defeats Manny Pacquiao in the Fight of the Century. Khan is a decorated fighter with even an Olympic medal to his name. His record stands with 33 fights and 30 wins, 19 of those by knockout and three defeats.

Here’s what you need to know about potentially the next big fight:

Speaking to the media from his San Francisco training camp, Khan said that he’s behind Mayweather to defeat Pacquiao. The Bolton-born fighter says:

I really think Floyd will win this fight. Floyd is the No1 in the world and I’ve always wanted to fight the No1. My style is different to Pacquiao’s – the range, the length, the size, the speed, and the power and the footwork as well. That is what will give Floyd Mayweather the biggest problems.

Though speaking to ESPN back in Khan expressed the views of millions of fans across the world by saying the fight “should have happened a long time ago.”

2. If Pacquiao Wins, His Next Fight Will Be Against Mayweather

Mayweather’s camp had been adamant throughout negotiations that there would be no rematch after the May 2 fight. The Associated Press Pacquiao promoter Bob Arum saying “A rematch is so down the road. And the idea I’d have to deal with these people again is one I don’t want to think about.” Meanwhile Floyd Mayweather Sr is adamant that “What’s going to happen tomorrow will not require a rematch. Trust me.”

3. Khan Is Due to Fight Chris Algieri in Brooklyn on May 29

Chris Algieri pictured with Pacquiao prior to their November fight in the Philippines. (Getty)

Khan, a devout religious man, is based in San Francisco while he prepares for his bout with Chris Algieri in the Barclay’s Center in Brooklyn on May 29. With all due respect to Algieri, that fight is likely to be a pitstop en route to the proposed September bout between Khan and Mayweather. Back in November 2014, Manny Pacquiao put Algieri down six times as he recorded a comfortable victory in the Philippines.

4. Khan Will Be at the Fight of the Century as a Guest of Mayweather’s Advisor Al Haymon

The Guardian reports that Khan will watch the Mayweather fight in a $100,000 seat courtesy of promoter/advisor Al Haymon. Interestingly, it’s been Haymon who has reneged twice on purported agreements between Khan and Mayweather’s camps for a fight. Though, according to Sports Illustrated, things are not good between Mayweather and Haymon. Golden Boy Production are filing a lawsuit against Haymon based on anti-trust laws.

5. Khan Won Silver at the 2004 Olympics for the United Kingdom

In total throughout his career, Khan has won WBA, WBA (Super) and IBF Light Welterweight titles. At the age of 17, he became the United Kingdom’s youngest ever Olympic gold medal winner when took silver in Athens. Khan has been dogged with criticism throughout his career of his perceived fragile, or glass, jaw. These allegations were particularly prevalent after his losses to Lamont Peterson and Danny Garcia in 2011 and 2012.Amir K 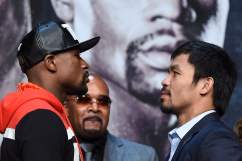