The Players Championship is often referred to as golf’s “fifth major” because of its star-studded field, large purse and overall prestige. Add in the fact that the tournament is at TPC Sawgrass, and there are plenty of reasons to pay attention.

Here’s one more reason: Heavy’s partners at DraftKings are running a $100,000 Players Championship contest that’s free to enter for first-time players. Think you know golf? Sign up now for a chance to win.

The field for the tournament is star-studded: Rory McIlroy, Jordan Spieth, Justin Rose, Tiger Woods (yeah, he’s back) and Adam Scott, to name a few, are teeing it up this week.

Like any event, though, there is a cut line. And that means some famous names will be heading home after Friday’s round. Our goal here is to make sure you don’t have any of those players in your DraftKings lineup.

With that being said, I feel confident in this week’s lineup.

Keep reading to get our lineup picks for The Players Championship and other offers and contests from DraftKings. 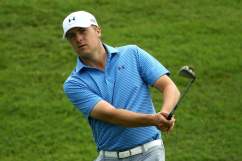 Stenson is the third-ranked player in the world and this course absolutely suits him. You need accuracy at Sawgrass and Stenson happens to be 7th on the Tour off the tee. His last 3 years at The Players: T35, T5, T15. Don’t be surprised if Stenson is the winner this week.

Kuchar is a cut-making machine – he’s 13 for 13 this year. He won this event in 2012 and finished T17 last year. Kuchar hasn’t been as accurate as he’d like, but his putting has been spot on.

Walker has enjoyed plenty of recent success at Sawgrass. He had a T6 last year and a T15 in 2013, and his game is even better in 2015. That price is low for him, considering he’s averaging 88.1 fantasy points per tournament. Walker is a no-brainer.

I’m slightly skeptical of Donald, who isn’t playing his best. But I used him at the RBC Classic a few weeks back and he responded with a T15 after playing poorly for most of the season. Donald has history at Sawgrass – he’s made the cut here every year since 2007 and has a couple of recent top 10s.

I like Kirk for a few reasons. One, he’s inexpensive for the product he’s given on the course (65.1 points per tournament). He’s also got 3 straight made cuts here, including a T13 in 2014. This year he’s made 11 of 14 cuts. I needed to find a bargain and Kirk fits that description.

Moore is relatively inexpensive as well and he’s been killing it lately, scoring at least 75 fantasy points in 3 of his past 4 tournaments. He’s made it through all 4 rounds at Sawgrass in all but one year since 2007 and had a T26 in 2014. Another good bet to stick around all weekend.

The U.S. Open is next month and you can turn $20 into $1 million with the Fantasy Golf Millionaire Maker contest designed specifically for golf’s second major.

Read More
DraftKings, Fantasy Sports, Golf, PGA Tour
The field is full with the top players in the world for The Players Championship this week. Keep reading to see our DraftKings fantasy lineup picks.