[Note: this article is a preview of the fight. Click here for highlights and results.] 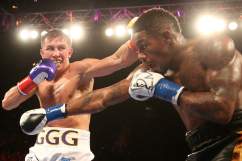 Knockout artist Gennady “GGG” Golovkin returns to the ring less than three months after his last appearance to defend his WBA Super World middleweight title against Willie Monroe Jr. this Saturday May 16 at The “Fabulous” Forum in Inglewood, California.

Gennady Golovkin enters the fight a huge favorite in Las Vegas and on online sportsbooks (see odds below), and observers agree that southpaw Willie Monroe Jr. will be nothing more than another stepping stone for GGG on his way to a marquee encounter against the likes of Miguel Cotto or Canelo Alvarez, and the eventual titular domination of the middleweight division.

But Monroe has his own ideas for Saturday.

“I think this is an awesome fight,” Monroe said. “We have two contrasting styles and that will make for some spontaneous combustion. We will see which style comes out on top on May 16.”

One of today’s most feared and exciting boxers, Olympic silver medalist Gennady Golovkin sports an unblemished record of 32-0 with 29 stoppages. Boasting an outstanding 91% knockout ratio, 33-year-old Golovkin has stopped his last 19 opponents.

Golovkin was last in the ring stopping Brit Martin Murray with an 11th-round TKO back in February of this year. Going into the Murray fight, Golovkin had steamrolled over Marco Antonio Rubio and Daniel Geale.

“I feel great,” Golovkin said during a recent media conference call. “I feel good now. [The Monroe] fight is really important for my career, and for everybody, for my people, for my team.”

Fighting out of Ithaca, New York, Boxcino 2014 Middleweight champion Willie Monroe Jr. (19-1, 6 KOs) is coming off of a  ten-round unanimous decision win over veteran Bryan Vera on January 16. Prior to that fight, 28-year-old Monroe had outpointed Brandon Adams and Vitaliy Kopylenko of Ukraine. Monroe’s only professional loss came in 2011 to Darnell Boone, who had a record of 17-17 at the time of that fight.

Saturday’s contest is the first 12-rounder for Monoe.

“Hopefully, Willie will be ready to fight because we’ll have a strong fight and a good performance for the fans,” Golovkin said. “I promise a big drama show.”

Let’s take a look at the lopsided numbers for Saturday’s event:

GGG celebrates after knocking out Daniel Geale in the third round to win the WBA/IBO middleweight championship at Madison Square Garden on July 26, 2014. (Getty)

The question on Saturday will not be if, but how and when. Monroe possesses speed, athletic talent, and ring smarts. He has quick feet, a comprehensive defense, and deep amateur pedigree. But unfortunately for him, he’s the kind of boxer GGG eats for breakfast.

An expert at cutting off the ring, pressuring fleet-footed opponents into the ropes, and unloading with his vicious brand of offense, Golovkin dismantles runners before giving them a proper burial.

Monroe may elude Golovkin for a few early rounds, using lateral movement and jabs to keep him at bay. But I predict that Monroe’s lack of pop will not gain any respect from GGG, and the ”Good Boy’ from Kazakhstan will begin breaking down the New Yorker in the fourth round and finish the outing with a 10th-round tko.

Guy’s pick: Golovkin wins by tko in the 10th round.

Who do you think will win, and how? Vote here: