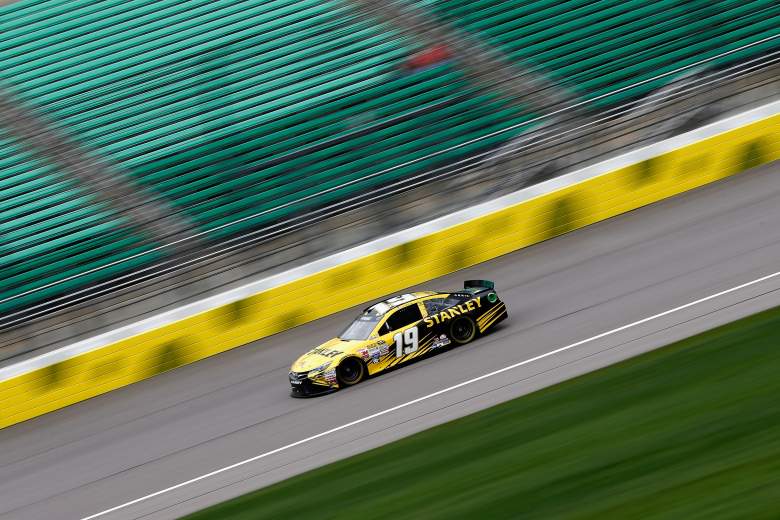 Carl Edwards and the rest of the Sprint Cup drivers race Saturday night in the SpongeBob SquarePants 400. (Getty)

In the final Sprint Cup Series race before the All-Star festivities next weekend in North Carolina, the NASCAR schedule brings the drivers to Kansas Speedway for Saturday night’s SpongeBob SquarePants 400.

Get a preview of the race, including the starting lineup, right here.

Daytona 500 winner Joey Logano starts on the pole and will be joined in the front row by Kasey Kahne.

The green flag start is scheduled to wave at approximately 7:46 p.m. Eastern. The race will air on FOX Sports 1 with Mike Joy (lap-by-lap), Darrell Waltrip (analysis) and Larry McReynolds (analysis) in the booth. They’ll be joined by pit reporters Jamie Little, Chris Neville and Matt Yocum.

But if you can’t be in front of a television, there are other ways to catch the action from Kansas Speedway, including online or on your mobile device

Editors note: Interested in making money playing fantasy sports? If so, check out what Heavy’s partners over at DraftKings are doing. They’ve created daily fantasy sports contests designed to make you lots of cash. Easy to join, fun to play and no commitment – participate when you want. Sign up for DraftKings today.

How to Watch NASCAR SpongeBob SquarePants 400 on Mobile