The world got its first glimpse of the teen’s ball skills in this minute-long video posted by Hoop Mixtape.

O’Neal Jr. was filmed playing with California Supreme this past weekend in Houston at the 2015 Big Cup and his proud father jetted in to watch his son play despite having to work as an NBA analyst on TNT during the playoffs the same day.

Shareef is currently a freshman at Windward High School in Los Angeles, but it seems the tape has already been noticed. As a result of the online showcase, the University of Southern California appears to have offered him a scholarship with the college’s Division 1 program when he graduates.

But Mike Law, who coached Shareef on the California Supreme AAU team, says the youngster is on the right path. “One day people will be talking about Shareef the same way they talk about his dad … he’s that gifted,” Law told TMZ.

I am blessed receive an offer from the University of Southern California #USC #blessed pic.twitter.com/XqthUGAD4r

My video made it to worldstar ?? 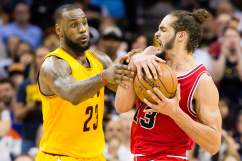 How to Watch Cavaliers vs Bulls Game 6 Live Stream Online