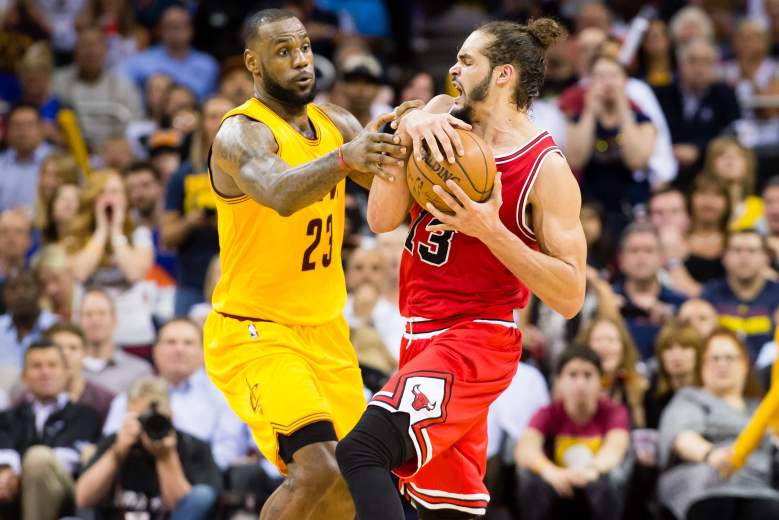 LeBron James of the Cavaliers, left, and the Bulls’ Joakim Noah fight for possession in Game 5. (Getty)

LeBron James took over when Cleveland needed him most. And did so on a sprained ankle.

James, nursing an injured left ankle, poured in 38 points and added 12 rebounds in a turnover-less effort to lead the Cavaliers to a 106-101 victory over the Chicago Bulls in Game 5 of their Eastern Conference semifinal series.

The Cavs have a 3-2 lead and will look to close out the series Thursday night in Chicago.

The game will air on ESPN and has a scheduled tip time for 8 p.m. Eastern. Play-by-play announcer Mike Breen will be joined by analysts Mark Jackson and Jeff Van Gundy on the call.

Editors note: Make the NBA postseason more exciting with one-day fantasy games from Heavy’s partners over at DraftKings, who have created the NBA $90K Sharpshooter contest, which begins Thursday, May 14, at 8 p.m. Eastern. The contest is FREE for first-time DraftKings users and $3 for current members. First prize is $5,000 and 7,000 entered teams get paid. Fill an 8-player lineup with a $50,000 salary cap and if your selections do well on the court, your fantasy team will also. The Sharpshooter runs every night there are at least 2 games on the schedule, so if you miss Thursday’s deadline, you can sign up for Friday’s contest.

Cavs Win Game 5An all-access look as LeBron James took over and led Cleveland to a pivotal win in the series. About the NBA: The NBA is the premier professional basketball league in the United States and Canada. The league is truly global, with games and programming in 215 countries and territories in 47 languages, as well as…2015-05-13T18:41:23.000Z

Lebron James Takes Over Game 5 Scores 38 in WInJames scored 38 points as Cleveland held off Chicago's charge in the fourth quarter for a 106-101 victory. About the NBA: The NBA is the premier professional basketball league in the United States and Canada. The league is truly global, with games and programming in 215 countries and territories in 47 languages, as well as…2015-05-13T02:40:05.000Z

Read More
Basketball, Chicago Bulls, Cleveland Cavaliers, ESPN, NBA, NBA Playoffs 2015, TV, Watch ESPN
LeBron James and the Cavaliers will look to close out their series with the Bulls in Chicago Thursday in Chicago. Found out the ways to watch Game 6 here.