A photo posted by Leslie Hollingsworth (@lesliehollingsworthphoto) on May 31, 2015 at 10:46am PDT

Although Adam Setas married Kristen Saban, the daughter of Alabama football coach Nick Saban, in 2015, the couple of have known each for almost their entire lives.

There have been several twists and turns in their relationships, and nasty, unsubstantiated rumors about Kristen and Alabama offensive coordinator Lane Kiffin certainly don’t help, but the couple remains strong.

Here’s what you need to know about the son-in-law of one of the most powerful head coaches on the planet:

1. He Met Saban in Preschool in East Lansing, Michigan

Saban and Setas have known each other since they were five years old. Neighbors in East Lansing, their mothers would take turns carpooling the two to preschool. Although they kept in touch, they didn’t reconnect until they attended the University of Alabama together, and their first date wasn’t until their senior year.

She talked about the experience of finally dating her long-time friend:

I consider the first date to be when he took me to Five in Tuscaloosa about a month before we decided to be a couple. It felt more like a first date – lots of nerves, I changed my outfit probably ten times before he picked me up, I called my mom and sister-in-law to keep me calm…I was super nervous! But it was because I knew I really liked him.

2. He Played Hockey at Alabama

Growing up in Michigan, Setas was, unsurprisingly, a good hockey player. He played at Lansing Catholic High School and went on to join Alabama’s team as a freshman. He played three seasons in Tuscaloosa, tallying 23 points (seven goals, 16 assists) in 66 games played.

After graduating from Alabama, Setas worked as a Financial Operations Intern at Mercedes-Benz, a Senior Analyst at Culverhouse Investment Management Group and then an Equity Research Associate at Sterne Agee.

Around October of 2014, he and Kristen moved to Birmingham when she landed a job at the Bruno Event Team, and he was hired as a Financial Advisor for Merrill Lynch.

They recently purchased a house together in Mountain Brook, which is about an hour east of Tuscaloosa. 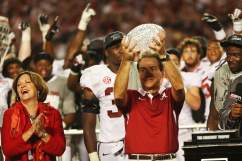 4. He Proposed to Saban A Year After They Started Officially Dating

The two had different lives while at Alabama but ultimately rekindled their relationship in January of 2013, when Alabama was winning a second-straight national title with a blowout win against Notre Dame. The officially began dating Valentine’s Day of that year, and Adam had proposed by June of 2014.

Here’s how the couple describes the proposal on The Knot:

Adam told her he had to “run an errand” before he came back to take her to dinner. While he was out, he called Kristen to tell her his jeep had broken down in East Nashville and that he needed her to come pick him up by the pedestrian bridge across the river. He said that AAA was coming to tow the car soon…Kristen’s reply? …”Won’t AAA give you a ride back here?” (typical response) A frustrated Adam explained that he needed her to pick him up soon so they wouldn’t miss their dinner plans. Kristen agreed (finally) and made her way to the bridge.
When she arrived, Adam was standing on the bridge, flagging her down to come “see something cool” from the top of the bridge. “It’s really neat, you’re going to like it, I promise.”

Kristen, in high heels, trekked (literally) up the bridge to meet Adam. She looked out over the bridge trying to figure out what Adam could possibly show her, besides the amazing view of the skyline of Downtown Nashville. Adam began to laugh and said, “I have to tell you something, but you’re going to be so mad!” (What could possibly be going on now?!) “My jeep is fine…nothing is wrong with it…” Kristen gave him her casual “like, really?” stare … “And AAA is not coming to get my car, but I do need to ask you something” …

At this point Kristen thought that “this could be what I think it is” but wasn’t positive. Adam held her hands and said, “Kristen, we’ve known each other since we were so little, and we’ve been together for a while now and we’ve almost kind of been together our whole lives. I love you so much and I want to spend the rest of my life with you.” He got down on his knee, pulling out a box from his suit jacket. “I was wondering, Kristen, will you marry me?” She cried and said (another typical response) “Yeah!….I mean YES!”

The two were married May 30, 2015, in Tuscaloosa, in a ceremony that included a fireworks display and the couple riding through Bryant-Denny Stadium in an old school Rolls Royce. According to the couple’s profile on The Knot, which has since been taken down, the matron of honor is Kelsey Laney Saban, the wife of Kristen’s brother Nicholas, and the mother of Nick Saban’s first grandchild, who was born in December 2013.

A photo posted by Leslie Hollingsworth (@lesliehollingsworthphoto) on Jun 1, 2015 at 6:44am PDT

5. His Family Owns a Produce Company in Michigan