James, his wife Savannah and two of their three children posed for a selfie after the Cavs won the Eastern Conference Finals last month. (Instagram)

LeBron James is a busy guy.

When the Cleveland Cavaliers standout isn’t racking up triple-doubles in NBA Finals games, he’s also a dad to his three kids. So, what do we know about the James family? James and his wife, Savannah Brison, have two sons, LeBron Jr. and Bryce Maximus, as well as one daughter, Zhuri, who was born last year.

1. LeBron James, Jr. was born on October 6, 2004 & Is Already Getting Attention From College Basketball Teams

James’ namesake was born just a few days before the start of his second NBA season and, it seems, the now 10-year-old, known by his family as “Bronny,” seems to have also picked up the basketball bug.

LeBron Jr. is already dominating on the prep circuit and he hasn’t missed a step since changing teams. Like father, like son, eh?

Earlier this year LeBron Jr. showcased his highlight-ready skill set with a pair of performances in The League Dallas/Hype Sports Summer Jam. The younger James dazzled fans of the, seriously, fourth-grade AAU team, driving the lane and draining shots like he was already competing in the NBA. He’s already earned a handful of MVP honors and, when he’s able to get courtside, LeBron certainly likes what he sees.

2. James Was Not Happy About His 10-Year-Old Son’s Recruitment

Something LeBron doesn’t like? The recruitment rumors already surrounding his 10-year-old son. As a former No. 1 overall pick and highly sought college basketball recruit, the elder James certainly understands the business of NCAA hoops. He just doesn’t understand why the NCAA seems to, already, want his son.

LeBron discussed his son’s recruitment with ESPN earlier this season:

Thad Matta said LeBron James, Jr. "will be" on his radar for recruiting. The kid is 9 years old.

The James boys show off their dad’s Nike apparel after a Cavs game earlier this season. (Instagram)

The James boys grew up with basketball so it only makes sense that they spend a good amount of time on a basketball court. Or at least on the sidelines. LeBron, Jr. and Bryce Maximus have been spotted at a handful of Cavs games this season.

When the family isn’t sitting courtside, they’re usually in front of the TV. LeBron and his sons regularly stage movie nights in their Cleveland home and even stage fairly epic video game battles. The James clan took on NBA2K15 earlier this year and LeBron wasn’t afraid of a little trash talk with his kids.

Movie night with these two crazies! We're watching a scary movie by the way! Crazy how certain things get passed down to your kids. Horror movies is one of them. Crazy I know. Hahaha! 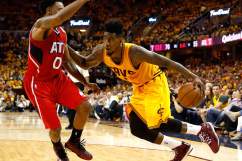 LeBron and Savannah welcomed their third child, and first daughter, Zhuri on October 22. Zhuri’s addition to the James clan was a slight change of pace for the pair, who had to slightly alter a few of their parenting approaches for a daughter.

James explained the difference to Cleveland.com:

It’s a lot different for me, you give rough love to your boys and you give soft love to your daughter. I understand that and I look forward to the journey of all three of them growing up.

James was with the Cavs on the morning of October 22 in Memphis and while he was not scheduled to play in the preseason game, he was not on the team bench either.

Zhuri’s presence was quickly documented on social media and James broke down a particularly noisy night in November:

Yup she at it again. Been up for about an hour now. She wants to stroll thru the house and listen to old school jams. Np Fox "Get Off"

coincidence, cause that's exactly what I'm doing at this very moment. Whatever you want, daddy here for you.

Followed by Michael Jackson "Don't Stop til You Get Enough" George Benson "On Broadway" and George McCrae "Rock Your Baby". What a…..

Ok enough of me. She ready for mommy now. Oh by the way good morning everyone! I'm tired as h.e double hockey sticks! Lol

5. James Has Spoken Publicly About His Commitment to Being a Good Father

James has taken his role as a father seriously; no matter what has happened with his basketball career. James, who never knew his own father, Anthony McClelland, has not been shy about the influence that absence had on his life and he’s done everything in his power to make sure he is not the same.

He even went so far as to thank his father for his lack of a role in his life:

Because of you Pops! Thanks all along. Could have said why me with u not being there but look what I made of myself. Thanks to Huffington Post for the graphic. #StriveForGreatness

James has worked to make sure that he is a clear and frequent presence in his children’s lives and, when he isn’t playing professional basketball, he’s holding movie nights and standing on the sidelines of other basketball games.

Happy official 10th Bday Bronny! Know I'll always have your back. Love you son and wish u many more great days!! And I'll be there to tie your shoe strings of life to protect you from trippin the wrong way. #ProudDad #CantBelieveHesTenAlready #Bronny #JamesGang #StriveForGreatness