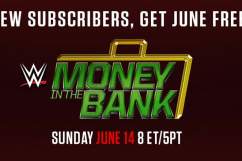 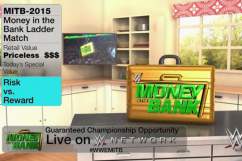 Welcome to WWE Money in the Bank 2015! A wealth of top talent will vie for a shot to grab the MITB briefcase and have a chance to cash it in for the championship of their choice. The WWE World Heavyweight Championship will also be up for grabs in a Ladder Match between champion Seth Rollins and challenger Dean Ambrose. Here’s all the results and highlights you need to know from the 2015 edition of WWE Money in the Bank.

Highlights: Truth enjoyed a moment with the live crowd and talked about how great it was to wear King Barrett’s royal gear. He noted that he should be casted in the next season ” Game of the Thrones” and be crowned King WHAT’S UP? King Barrett arrived with some…interesting regal gear. He took the mic and called Truth an idiot as he showcased his fresh royal garb. Barrett and King got into the heat of things when Barrett booted him in the gut. Truth got in a few moves afterwards and brought Barrett down. Truth worked over Truth’s arm for a bit, but Barrett fought it off. Truth ended up mocking Barrett, pushing him over the top rope and dancing to the crowd’s enjoyment. Back in the ring, Barrett worked over Truth after landing a clothesline. Barrett continued his onslaught on Truth with strikes, a suplex and a sleeper hold. Truth escaped the hold and eventually made his fast-paced comeback against Barrett. Truth got taken down once again after a side kick to his gut and a big boot from Barrett. Barrett looked to land his Bull Hammer, but Truth countered him with a lockup pin for the win. Truth proclaimed to the crowd that he was the new king of the WWE. He left the ring and gave jobs to the commentators. He even went ahead and claimed Barrett’s crown. Barrett got it back from Truth afterwards. Truth made his way up the ramp quickly as Barrett looked on in disgust.

Dolph Ziggler vs. Neville vs. Roman Reigns vs. Randy Orton vs. Kofi Kingston vs. Sheamus vs. Kane (Money in the Bank Ladder Match for the WWE World Heavyweight Championship match contract)

Highlights: Mayhem ensued as soon as the bell rang. Every man in the ring began to tear into each other while Kofi retrieved the 1st ladder. Everyone stopped fighting amongst themselves to beat Kofi down. Several Superstars tried to go for the briefcase, but no one was successful. Kane and Sheamus threw everyone else out of the ring before Sheamus laid Kane out with a running strike. Kane quickly got back to his feet to bring Sheamus back down, but Kane ate a DDT from Ziggler afterwards. Ziggler got slammed with a White Noise once Sheamus returned to he ring. Sheamus used a ladder to strike both Kane and Orton. Sheamus and Orton got in a battle outside the ring for a bit and even threw a ladder into Kane’s gut. Kofi almost grabbed the briefcase behind Sheamus’ back, but he was stopped soon enough. Sheamus clothesline him down and then set up a ladder in the bottom ring corner. Kofi saved himself from getting destroyed by Sheamus and fought back for a bit. Sheamus then turned right around into a Springboard Dropkick from Neville, but Neville got taken down by Kofi. Kofi even dropped Sheamus with his Trouble in Paradise. Neville and Kofi began battling in the ring for a bit. Neville landed a monkey flip on Kofi after a side kick, but Kofi almost climbed the ladder soon afterwards. Reigns entered the ring to go to town on both men and stop their ladder climb attempts. Reigns even powerbombed Kofi on the ladder set up in the bottom ring corner. Right after that, Reigns powerbombed Neville right on top on Kofi, who was still laid atop the ladder. Kane made his return to the ring and chokeslammed Reigns right off the ladder as he tried to ascend it. Kane looked to make his climb, but Orton pulled him off and landed his RKO. Orton then made his attempt to climb the ladder, but Kofi pulled him off. Kofi ate an RKO for his troubles. Neville hopped over Orton right to the ladder, but Orton pulled him off and hit with an RKO as he fell off the ladder. Sheamus and Orton got into a scuffle soon enough. Both men tore into each other in pursuit of the briefcase. Sheamus got the better of it by throwing Orton face first into a ladder and then planting him with his Brogue Kick. Sheamus climbed the ladder, but Ziggler did the same and got in his way. Both men battled at the top of the ladder, which saw Ziggler lock Sheamus in a sleeper hold and then drop him down to the mat with his Zig Zag. Neville then landed his Red Arrow on a laid out Sheamus. Neville and Ziggler ended up climbing up the ladder and fighting each other off next. Neville slammed Ziggler’s head into the ladder several times to knock him off. Kane brought Neville back down and attempted to chokeslam him, but Ziggler superkicked him. Kane got back up anyways and kicked the ladder right into Ziggler and Neville as they tried to use it on him. Kane them dropkicked another ladder into Ziggler’s gut. Kane then turned right around into a Superman Punch from Reigns. Reigns then landed a high flying splash right onto every man over the top rope. While everyone was laid out, the two other members of the New Day looked to help Kofi win the match. Reigns landed his apron dropkick on Xavier woods and Big E to eliminate them. Reigns then stopped Kofi from grabbing the briefcase and powerbombed him onto the other men outside the ring. Orton almost landed an RKO on Reigns, but Orton ended up on the receiving end of a Spear instead. Shockingly, Bray Wyatt appeared out of nowhere to stop Reigns. He landed his Sister Abigail on Reigns and left him unconscious. Sheamus hopped into the ring to grab the briefcase, but Neville stopped him. Sheamus kept his balance on the ladder anyways, pushed Neville off and then became Mr. Money in the Bank for the 1st time.

Highlights: After locking up, Nikki pie-faced her championship challenger. Paige screamed in Nikki’s face after a 2nd lockup. Paige laid in some stiff kicks to Nikki to force her out of the ring. Once Nikki got back into the ring, Paige threw her back out and then dropped her with a somersault splash off the ring apron. Paige almost did more damage to Nikki outside the ring, but Nikki did it to her instead. Nikki continued to assault Paige outside the ring. Nikki got a bit cocky and taunted everyone with some random pushups. Backstage, the rest of the Divas roster watched both ladies in action. Nikki soon laid in a Snap Suplex on Paige and locked her in a sleeper hold. Paige fought out of it and landed a nice knee strike to Nikki, but she couldn’t grab the winning pin. Nikki got back into fighting shape soon after and used a Rebound Suplex to put down Paige. Nikki locked Paige into a leg lock, but Paige escaped and made her comeback with knee strikes to Nikki on the ring apron. Paige’s offense didn’t last long though, as Nikki dropped her face first into her knee. Nikki locked Paige into another sleeper hold, but Paige escaped once again and hit Nikki with a side kick. The action picked up again when Paige ran right into a Spinebuster. Nikki looked to splash Paige n the ring corner, but Paige moved out of the way at the last second and began beating down Nikki. Paige locked Nikki into a pretty painful looking leg/head submission, but Nikki grabbed the bottom rope to escape. Nikki then responded by hitting her Alabamaslam on Paige for a 2-count. Once both ladies got back to their feet, Paige almost locked Nikki in the PTO. Nikki escaped and then planted an elbow on Paige, which was followed by an Enzuguri off the top rope. It wasn’t enough to finish Paige, though. Nikki almost landed her Rack Attack, but Paige fought her off and put her down with her Ram-Paige finisher. Nikki kicked out right after, though. Both women climbed the top rope and got in a striking brawl that ended with both Divas falling to the floor. Brie ended up switching places with Nikki and tried to beat her with Twin Magic. Paige ended up pinning Brie and looked to win the title. Paige kicked Brie out, but Paige turned right around into a stiff elbow and Rack Attack from Nikki for the win.

Check out the following page to get more results/highlights from WWE Money in the Bank 2015!