As you’ve probably noticed, Andy Murray has a natty new(ish) logo on the left-hand shoulder of his freshly minted Under Armour shirts. Like his Wimbledon semi final opponent Roger Federer, Murray is seeking to develop his personal brand, and there’s no better way to do that than to have a logo. Think Air Jordan, Tiger Woods or, indeed, Federer’s own RF motif. Once you’ve developed a recognizable symbol for your personal brand, and its desirable enough to the mass public through sheer weight of performances, personality or both, you’ve got a handy, trademark-able little squiggle to cash in on.

So what does Murray’s logo stand for? Well, it’s a combination of the letters A and M (for, you know, his name) and the number 77, which represents the number of years between Murray’s Wimbledon success and the previous Brit to win at the All England Club, Fred Perry. The logo was designed by the Aesop Agency, and also serves as the logo for his management company, “77”, which he established with former Spice Girls manager Simon Fuller.

For more details on Andy Murray’s net worth, click on the link below. 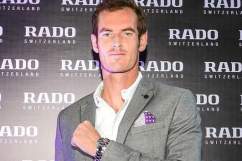 Andy Murray’s Net Worth: 5 Fast Facts You Need to Know