Marc and Audrey Leishman have endured an emotional 2015.

Early in 2015, Audrey slipped into a coma after a series of infections.

The prognosis was not good, but she miraculously pulled through.

Now Audrey is on the mend and Marc, 31, is back on the course and is aiming for his first major championship at the 2015 British Open.

Here’s what you need to know about the Leishmans:

Back in April 2015, Audrey began having flu-like symptoms, the strep throat.

Things got worse quickly as she contracted pneumonia.

From there she suffered acute respiratory distress syndrome and toxic shock syndrome. 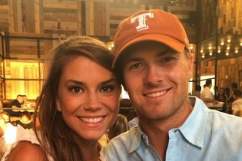 Is Jordan Spieth’s Girlfriend at the British Open?

2. Audrey Then Slipped Into a Coma & Was Put On a Ventilator

Soon after Audrey was put on a ventilator after her organs began shutting down and her lungs were filling with fluids.

She was in the couple’s home in Virginia Beach, Virginia.

It was very scary. I can clearly remember not being able to breathe. I am just grateful to be here. I appreciate everything. 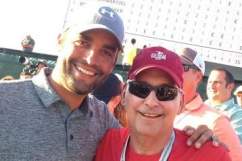 Obviously, the prognosis was not good. Audrey had endured so many serious physical ailments in such a short amount of time.

And doctors gave Audrey a small chance of pulling through.

Marc said in an interview with The Associated Press:

She’s young, she’s strong and got a real will to live for our two boys and me. … We’re building a new house at the moment. She’s got all that to look forward to and I guess that’s why she fought so hard and got through it somehow.

4. She Regained Consciousness 2 Days Before the Masters

Despite the unfavorable prognosis, Audrey didn’t give up her fight.

Leishman didn’t play in the Masters and instead was at his wife’s side.

Doctors decided they should change Audrey’s position, moving her onto her stomach.

The idea worked as she began showing signs of coming out of the coma.

And 2 days before the golf season’s first major, Audrey came out of the coma and was taken off the ventilator.

5. The Couple Has 2 Children

Marc and Audrey are building a new home in Virginia.

The couple, who has been married since 2010, has 2 young children, both boys. Harvey is 3 and Oliver is almost 2.

Marc, who is an Australian native, has 1 career PGA Tour victory. It came at the 2012 Travelers Championship.

Read More
5 Fast Facts, Golf, PGA Tour
After nearly losing his wife Audrey earlier in 2015, Marc Leishman is back on the course and looking for his first major title. Learn more about them here.