1. Brown Kidnapped Sandra in a Vehicle Owned by Buster

According to AL.com, the 49-year-old Brown showed up at the house of Buster and Sandra Barnett in Elenwood, Georgia around lunchtime on Wednesday. She was reportedly upset that Buster Barnett and his wife were planning on going on a trip that she didn’t know about. Armed with handcuffs, which police state she had purchased prior to the incident, she kidnapped Sandra and took her away in a Dodge Durango owned by Buster.

Barnett was on the phone at the time of the confrontation at her house, and a friend on the other end heard a struggle before the line went dead. The friend called a male accomplice, who went to check on Barnett just as Brown was leaving the scene.

Police said that Buster Barnett and Brown had been engaged in an affair for several years, while Barnett’s brother stated Brown was an ex-gilfriend. 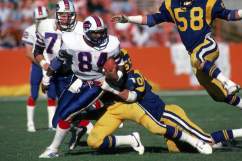 2. After a High-Speed Car Chase With Police, Brown Shot Both Sandra & Herself

Thursday morning, the Dodge Durango was spotted by authorities near Interstate 20 in Waco, Georgia. Police began to pursue Brown, and the chase continued on I-20 into Alabama.

Brown eventually pulled over near mile marker 208, and that’s when she fatally shot both Sandra and herself. There was reportedly no shots fired by the police.

3. Brown Was on Probation for Kidnapping Her Child

According to Clayton County Police Captain Richard Gandee, Brown, a native of Lithonia, Georgia, was “on probation for kidnapping out of the state of Texas. She had kidnapped her child that she had lost custody of, and the jurisdiction had to track her for like three days to find her.”

She worked as a teacher at North Atlanta High School between 2008 and 2013.

“Everybody just remembers this bubbly, happy spirit — just happy,” said co-worker Nimet Muhammad, via 11Alive News. “Every day at work, you could just count on her.

Barnett plays against the Rams in 1983. (Getty)

Buster, who played at Jacksonville State, was drafted No. 299 overall by the Buffalo Bills in the 1981 draft. A tight end, he spent four seasons in the league, amassing 26 receptions for 236 yards and a touchdown.