Tom Watson is one of the most decorated golfers to ever be on the PGA Tour with eight wins in Major Tournaments after his start 41 years ago. The golf world was saddened when the Hall of Famer’s announced that the Open Championship 2015 would be his last. Watson finished up after day two of his last British Open at +12, but the crowd cheered and crowded around him as if he was leading by 12. Watson will go down in history as a signature player in his era and all fans tipped their hats to the legend. Watch the video above to see the Top 10 moments in his career.

Watson won his first Major Championship, the British Open in 1975 after beating out Jack Newton, just one year after he joined the PGA Tour.

His most famous Open Championship win was in 1977 named “Duel in the Sun” a Turnberry where he beat the legendary Jack Nicklaus. Watson played his two final rounds 65-65 ending in a birdie on the 18th to beat Nicklaus’ impressive 65-66 giving it the title of “Tournament of the Century.” Watch the video above to see a full overview of the match.

US Open Championship- One Time Winner

Watson’s won both the Open Championship and the U.S. Open in 1982. In his first and only U.S. Open win, win, he made a chip shot from the greenside rough on the 71st hole for a birdie followed by another birdie on the 18th hole and to clinch the victory and once again, Jack Nicklaus found himself runner up behind Watson. Today, that exact shot is considered one of the greatest pressure shots ever hit on tour.

Watch the video above to see his clutch chip.

In 1977, he won his first Masters Tournament by beating out Jack Nicklaus which would turn out to be a foreshadowing of his victory over Nicklaus in the Open Championship that same year. He won the Masters again in 1981 by defeating Jack Nicklaus again along with Johnny Miller.

Watch the video above to see highlights on the 1977 Masters featuring Watson and Nicklaus. 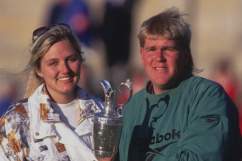