Gyasi Zardes is making quite a name for himself with his dominant play during the Gold Cup this summer. The first-time USMNT player has been a sparkplug for the team throughout the tournament and seems to have found his rhythm on the front line with Clint Dempsey.

But who is Zardes’ support system away from the field? It begins with his wife, Madison Goodvin, a talented athlete in who own right, who first met Zardes when they were both student-athletes at CSU Bakersfield. The two have been married for nearly two years and Goodvin is a regular in the stands during her husband’s games. Here’s what you need to know about her:

The long-time couple, who met while they were both student athletes at CSU Bakersfield, tied the knot in 2013 in a ceremony in Los Angeles, California.

Los Angeles Galaxy fans tried to help make the couple’s day special by attempting to buy out their wedding registry. Although they might not have been able to clear out the registry, both Zardes and Goodvin seem fairly happy post-ceremony. 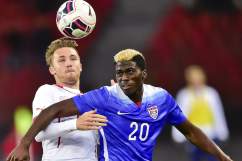 2. She Competed With the CSU Bakersfield Swimming & Track & Field Team

It isn’t only Zardes who boasts some serious athletic talent. In fact, Goodvin may actually be more experienced than her husband after competing with two different teams during her college career.

As a freshman Goodvin was a dominant swimmer at CSUB, winning the 200 IM at two different dual events and adding a victory at the UC Santa Cruz dual. Then, as a sophomore, Goodvin changed her focus slightly, returning to land as a sprinter with the track and field team. She ran her best time in the 200m at the Cal Poly Pomona Invitational with a 30.38 time.

After college, Goodvin left her athletic career behind, focusing on a slightly different career-path as a special education teacher.

3. Her Brother Was a Golfer at CSUB

Athletic talent seems to have been a bit of a family affair for the Goodvin’s. Chase, Madison’s brother, was a force to be reckoned with as a member of the CSUB golf team, competing with the squad for several seasons.

Chase did his family proud ahead of the 2011-12 season, winning the Kevin Harvick Scholarship and offsetting his academic costs as a criminal justice major at CSUB. Chase said the scholarship “makes life a little bit easier to not have to worry about paying for tuition and books because even though I’m living at home.”

Goodvin won several prominent events over the course of his college career, including the Taft City Amateur in 2012. 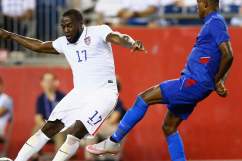 Where Is Jozy Altidore?

4. Goodvin & Zardes Have One Son Together

The couple became first-time parents early last year when they welcomed their first son. Gyan Zardes has since become a bit of a social media celebrity, a mainstay on his dad’s Instagram.

Gyan and Goodvin are also frequently spotted in the stands at LA Galaxy games, watching Zardes compete with the MLS squad.

5. She & Zardes Live in Los Angeles

Goodvin and Zardes have planted their family’s roots in Los Angeles after he was signed by the Galaxy as a homegrown player on December 20, 2012. Since that move, the couple has watched Zardes’ on-field career blossom and in 2014 he enjoyed a breakout year, scoring 16 goals, including tow game-winners, as well as two assists.

Zardes set a Homegrown Player record for goals scored during a single MLS season last year and notched a goal in the MLS championship game, en route to a 2-1 victory over the New England Revolution.