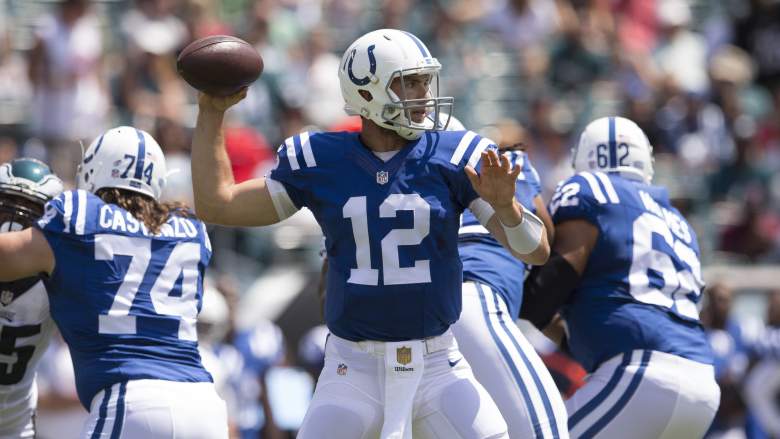 Colts franchise quarterback Andrew Luck will get the start against the Chicago Bears on Saturday night. Expected to play into the second quarter, Luck has new weapons this season in first round draft pick Phillip Dorsett, and free agent veterans Andre Johnson and Frank Gore.

Despite taking a ton of hits so far in his NFL career, Luck has not missed a start in throwing for close to 13,000 yards in three seasons.

Against the Bears, Luck finished the game 5-of-9 for 71 yards and a rushing touchdown in a little more than a quarter of work. He exited the game with the Colts leading 8-6. Check below for highlights of his performance.

Below are Luck’s stats to date:

Luck was Sacked on his 1st Dropback

VIDEO: Pernell McPhee had a nice series on D. 1st a sack then a hurry. http://t.co/5sZa3cVvqZ

Things didn’t go well on Luck’s first drive, as he was sacked and fired a pass over the head of his intended receiver. The Bears forced a three-and-out.

Luck Showed off Wheels to Score a Touchdown

VIDEO: Kyle Fuller beat on this catch by T.Y. Hilton, and Fuller called for a penalty. http://t.co/0LhQRdzDsv

After this bomb down the field to T.Y. Hilton, Luck would guide the offense into the end zone for the first time.
Perhaps the most underrated running quarterback in the NFL, Luck scored from five years out, and then converted the 2-point try to give the Colts a 8-6 lead in the second quarter. 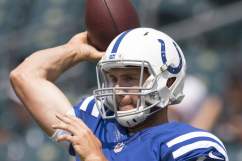 Read More
Andrew Luck, Football, NFL
Andrew Luck played about a half against the Chicago Bears on Saturday night. How did he fare?