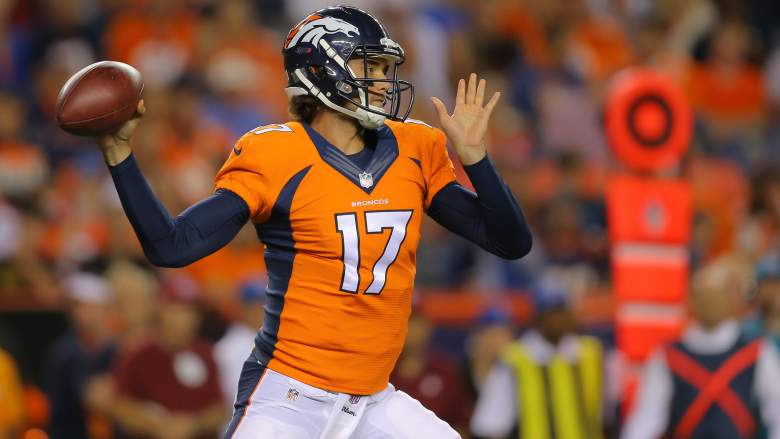 Brock Osweiler will get to play with the Denver Broncos’ first-team offense against a Seattle Seahawks team missing several key parts in its secondary. (Getty)

On just the second play from scrimmage, the always-dominant Von Miller proved to be in midseason form, as he blew past Justin Britt and stripped Russell Wilson to force the turnover.

Denver took over at Seattle’s 10-yard line, but a sack from Cliff Avril forced the Broncos to settle for an early 28-yard field goal from Connor Barth.

The @Seahawks traded up to get @TDLockett12. Now we know why… 46-yard kickoff return. Too easy. #DENvsSEA http://t.co/liMBru0Shw

Exciting jitterbug rookie Tyler Lockett got things started with a 46-yard kickoff return, and newly acquired tight end Jimmy Graham added a 12-yard reception on a Russell Wilson roll-out. However, the Seahawks’ offensive line continued to struggle, and a Malik Jackson sack in the red zone ultimately killed the drive.

Steven Hauschka tied it up with a 33-yard field goal.

Tyler Lockett Takes a Kickoff 103 Yards to the House

Oh, so that’s why the Seahawks traded a handful of picks to land Tyler Lockett.

After a pair of Broncos drives ended in field goals, the rookie out of Kansas State fielded a kickoff on the right side of the field, darted to the left side line and out out-ran everyone. It’s still unclear if the youngster will make an impact as a receiver, but in his first NFL game, he already looks like an incredible weapon as a return man.

Brock Osweiler Connects With Virgil Green for the Touchdown

What a strike! #Broncos' Brock Osweiler closes out the first half with a TD two-minute drill. https://t.co/Z839ZrDwXN

Getting the start for Peyton Manning, backup Brock Osweiler had a really productive first half, completing 15 of 20 throws for 151 yards, one touchdown and zero interceptions. All five of his possessions resulted in scores: four field goals and a pretty touchdown throw to tight end Virgil Green.

Osweiler showed terrific chemistry with both Green (five receptions, 45 yards) and Cody Latimer (four receptions, 49), and the Broncos offense racked up 240 yards in the first half.

that 3rd quarter made my stomach hurt

All-in-all, it looked a lot like the third quarter of a Week 1 preseason game.

The moment when the 4th Quarter became the Bennie Fowler Show… #DENvsSEA http://t.co/6vtucV9m1f

The Broncos offense received a jolt of energy when Trevor Siemian entered the game. The seventh-round pick out of Northwestern entered the game and immediately completed five of six throws for 90 yards. The big play came on a 41-yard strike to Michigan State product Bennie Fowler, who had to lay out for the highlight-reel catch.

Siemian ultimately missed an open Dominique Jones in the end zone, forcing the Broncos to settle for a field goal, but it was an impressive showing from the Big Ten QB-WR pair.

#Seahawks Thomas Rawls takes the screen pass in for a touchdown! #DENvsSEA pic.twitter.com/wvcFVNPysi

With just a couple minutes remaining in the fourth quarter, the ‘Hawks went 80 yards on 11 plays for their first offensive touchdown of the game. R.J. Archer utilized his running backs in the passing game to efficiently move down the field, and Thomas Rawls finished the drive by taking a screen pass 19 yards to the end zone.

The rookie from Central Michigan has impressed during training camp, and he continues to push the talented yet inconsistent Christine Michael, who fumbled earlier in the game, for the Seahawks’ third running back spot.

It’s not quite a rematch of the 2013 Super Bowl. Peyton Manning won’t be playing for the Broncos, while the Seahawks’ secondary will be Legion of Boom-less: No Richard Sherman, no Earl Thomas, no Kam Chancellor.

Nevertheless, there will still be plenty of intriguing talent on display. For Denver, compelling backup Brock Osweiler gets a chance to prove himself with the first-team offense, while rookie Shane Ray will see his first live game action in the NFL. For Seattle, Jimmy Graham makes his Seahawks debut, and Tyler Lockett, who the team traded a bevy of picks to acquire, already looks special.

The final score may not matter, and a handful of starters will sit out, but this one will still be fun. 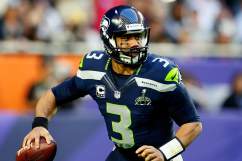 How to Watch Broncos vs. Seahawks Live Stream Online