The Buffalo Bills and the Carolina Panthers will face-off in their first preseason game tonight at 7:00 PM EST at Ralph Wilson Stadium in Orchard Park, NY.

This game will help the Bills determine whether Matt Cassel deserves a secure spot as their starting quarterback for the upcoming season. Other players such as Bryce Brown and Marquise Goodwin will also have a chance to grab a spot on the roster come September based on their performances during the preseason, starting tonight.

The Panthers’ of course are looking to win the game, but more importantly they want to avoid losing anymore players to the injury list that includes Johnson with an injured calf, Lotulelei whom will be missing from the defensive line and Silatolu whom will be absent from the offensive line. Cam Newton and the rest of the starters will be doing what they can in the first quarter before the backups come in to fight for roster spots.

Commentators Rob Stone and Steve Tasker will be the voices of the game on television, along with announcers John Murphy, Mark Kelso and Sal Capaccio. You can also listen to the game on the radio on these stations: WGR 550 (Buffalo), WCMF 96.5 and 950AM (Rochester), WKRL 100.9 (Syracuse), Fan 590 (Toronto) and the rest of the Buffalo Bills Radio Network.

If you have NFL Game Pass or NFL.com Game Center you can view the game there too.

Watch Bills vs. Panthers on Mobile

Greg Olsen is the veteran leader of the Panthers offense (Getty).

If you have an NFL Network cable subscription, you may watch the game on the NFL Network app, which you can download from the Apple Store or Google Play Store.

For international viewers, NFL Game Pass includes every game live online (for both the regular season and preseason) for a fee. The fee depends on country; visit the website for more details.

For those with a Sirius radio subscription, you may download the Sirius app from the Apple Store or Google Play Store and tune in to the Buffalo Bills or Carolina Panthers Broadcasts. 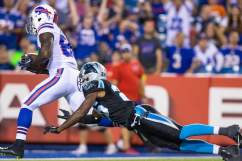