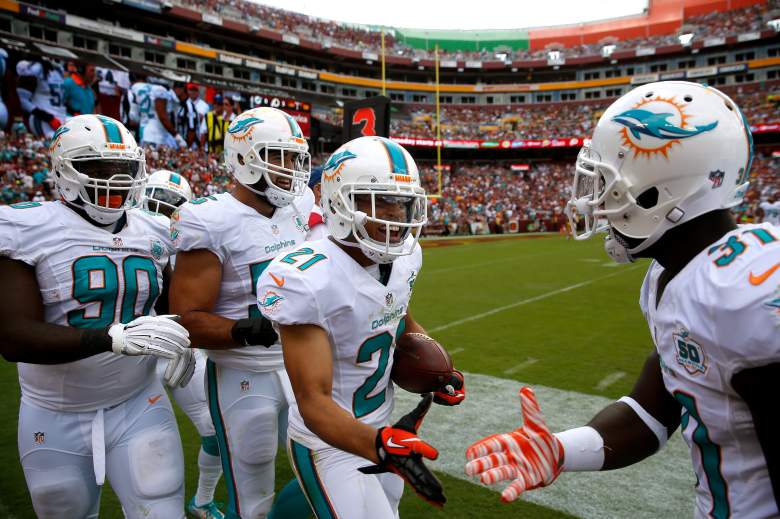 The Miami Dolphins opened the season with a come-from-behind victory over the Washington Redskins on Sunday. (Getty)

Jarvis Landry was the offensive difference on Sunday as the Miami Dolphins staged a come-from-behind victory over the Washington Redskins in week one.

Landry, who finished with eight receptions for 53 yards, gave the Dolphins the lead, and the victory, with a 69-yard touchdown sprint on a punt return in the fourth quarter. From there on out, Miami’s defense simply held, shutting down the Redskins’ comeback drive with a late-game interception and turnover on downs.

It’s a tough loss for the Redskins whose offense looked good early on, sparked by the strong rushing performance by Alfred Morris who finished with 107 yards on 24 carries. Kirk Cousins, getting the start under center, struggled down the stretch however, throwing two picks on 21-of-31 attempts for 195 total yards.

"It was frustrating….We competed well but it wasn't good enough." Jay Gruden on #MIAvsWAS

Ryan Tannehill finished the day 22-for-34 for 224 yards and one touchdown pass to Rishard Matthews.

That was a very pretty play.

Dolphins defensive back Brice McCain went up in the air to get the ball away from Washington’s Pierre Garcon and pick off Kirk Cousins with just over seven minutes left in the fourth quarter. It was the second Cousins interception of the afternoon.

It was a rough blow for the Redskins offense, which had been driving after Miami had taken the lead earlier in the quarter.

Jarvis Landry was having a pretty good afternoon already and then he returned a punt 69-yards for a touchdown that gave the Miami Dolphins the lead in the fourth quarter. Then it was a pretty great afternoon.

It was the first punt return for a touchdown for the Dolphins since 2012.

The Redskins defense looked aggressive from the opening snap of the second half, breaking through Miami’s offensive line on the Dolphins’ first drive of the third quarter. The attack ended in a Ryan Tannehill sack, fumble and fumble recovery that got the fans yelling pretty loud. Check out the play here: 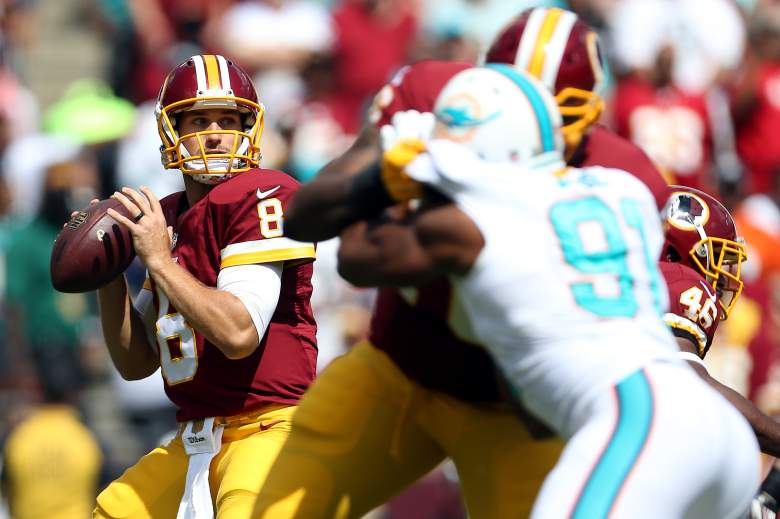 Although the Dolphins got some late-half points, the Redskins held a slim lead heading into the break.

It wasn’t a particularly pretty half for either squad as Miami looked a bit shell-shocked on both sides of the ball, particularly in the first quarter, and Washington was hit with injuries to big-time players on both the offense and defense.

DeSean Jackson was ruled out, after just one play, with a hamstring injury in the first quarter while cornerback DeAngelo Hall is questionable to return after suffering a rib injury in the second quarter. He left the game before the break and was spotted heading into the locker room.

If there was a bright spot for the Redskins, it was the run game and the somewhat surprising play by the boys in the trenches as the offensive line held its own against the Dolphins defense. Alfred Morris looked as good as he has in a long time and gave a jumpstart to the Washington offense early:

Ryan Tannehill finished the half 10-for-17 for 95 yards. Kirk Cousins was 10-for-14 for 98 yards, one touchdown and one interception.

The Dolphins Got on the Board With a Rishard Matthews TD

It took a little while – Ryan Tannehill had tried to connect with David Amerson several times – before finding Rishard Matthews for the first Dolphins touchdown of the afternoon.

The throw capped off an 80-yard Miami drive that showed what the Dolphins offense could do when Tannehill had a few seconds to step back and throw.

Check out the play here:

Remember those possible tight end problems for the Redskins? Jordan Reed is here to silence them.

The Washington tight end hauled in a jump ball pass in the end zone as Kirk Cousins started to find some rhythm under center. The quarterback, who had thrown a pick earlier in the game, completed three of four passes on the 77-play, 88-yard drive, capped off by Reed’s touchdown.

DeSean Jackson Is Out With a Hamstring Injury 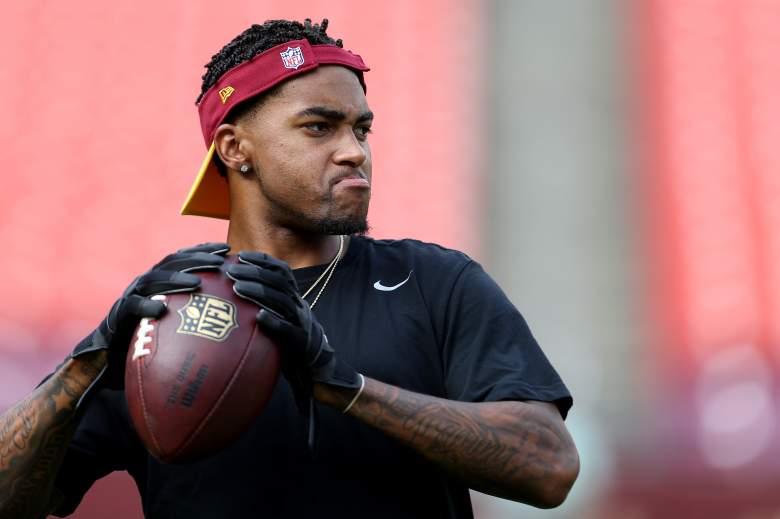 DeSean Jackson came up empty on a long route and left the field with a tweaked hamstring on Sunday. (Getty)

That’s not the news the Redskins wanted to hear.

DeSean Jackson was officially deemed questionable to return after tweaking his hamstring following a long route in the first quarter of play. Jackson was seen throwing his helmet as trainers looked at his leg.

Brandon Scherff and Morgan Moses both drew assignments of blocking Suh at times on that drive. Succeeded with chop blocks.

Washington capped off a 12-play drive with a 45-yard Kai Forbath field goal to jump out to an early 3-0 lead but it was the play of the offensive line on the first drive of the afternoon that should be noted.

Plenty had been made about the Redskins front line facing off against the Dolphins defensive attack, including the presence of Suh on the d-line. For the most part, Washington did a good job of containing Suh early although the group did give up a sack to Miami rookie Jordan Phillips. 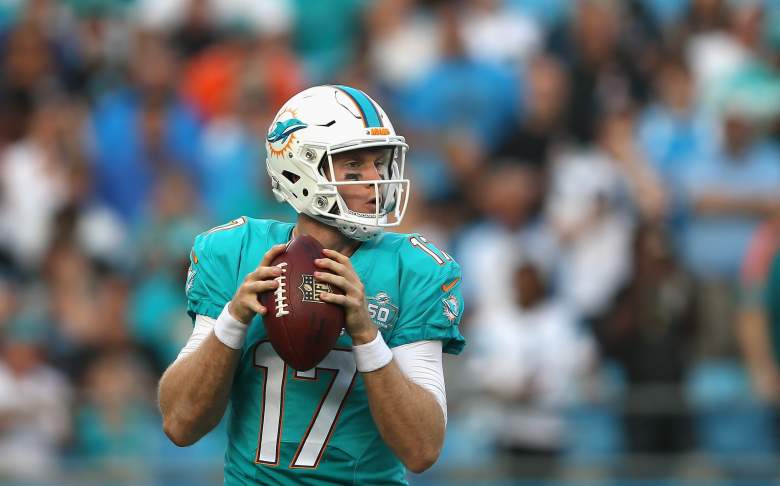 The Miami Dolphins fourth-year quarterback has seen steady improvement over past few seasons but after a $96 million contract extension, Tannehill needs to prove he’s not just worth the money but that he is capable of leading a team to a winning season. After all, only Robert Griffin III and Brandon Weeden have lower winning percentages than Tannehill among other quarterbacks drafted in 2012.

Tannehill is well aware of the high expectations surrounding the Dolphins this season. Miami’s defense already saw a spark with the offseason addition of Ndamukong Suh and Tannehill knows it’s up to him to spark the offense. He’s confident he can.

“I’m not curious; I’m confident in the way that we’re going to respond,” Tannehill told ESPN. “But I want to see it happen. I want to see us play a full game, push through, have a great fourth quarter no matter what the score is and find a way to win. That’s what it comes down to, being able to overcome adverse situations and finding ways to win.”

The Dolphins are the favorites on Sunday afternoon against Washington, in Washington, but week one is a fickle football fiend and nothing is guaranteed in a season-opener. Now, it’s up to Tannehill to make it all happen. 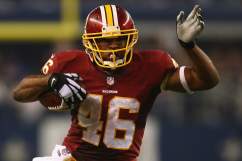