Jimbo Fisher and his family have been a staple at Florida State since he took over as the programs head coach. (Twitter)

Jimbo Fisher grew up on a farm in West Virginia.

It was exactly the kind of childhood you’d expect on a farm in West Virginia, hard, determined work with blue-collar parents who instilled deep values. Sports were also a way out. So Fisher turned to football. He left West Virginia and, for the past six years, has been the head coach of the Florida State football team.

He also hasn’t lost those values his parents made sure he understood and, just like it was in West Virginia, family has always remained the cornerstone of Fisher’s life. Despite the recent announcement that he and his wife, Candi, were separating, the Seminoles head coach is just as focused as ever on his family and the people who have been there from the very beginning. Here’s what you need to know about Fisher, his family and the ups and downs they’ve faced:

1. Fisher & His Wife Candi Announced They Were Separating This Year

Candi Fisher faced some serious social media backlash after FSU fans took to Twitter when she and Jimbo announced they had separated this year. (Twitter)

Fisher and his wife Candi took the college football world by surprise earlier this year when they announced that they were separating in June. According to a report by The Tallahassee Democrat, the long-time couple was working with a team of attorneys to mediate the terms of a possible divorce.

The couple released a joint statement after news of their relationship change went public:

After almost 22 years of marriage, we have decided to amicably separate. Thank you to our family and friends, and the fans who have offered kind words of support. Although we are in the public eye, we appreciate respect for the privacy of our children and our family, and humbly request only positive, accurate discussions surrounding our situation during this difficult time.

Despite requests for privacy and respect, Candi Fisher was on the receiving end of some fairly terrible social media comments after the separation news went public. 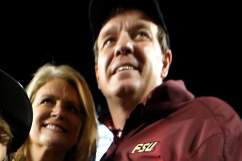 2. The Pair Had Been Married for 22 Years

The Fishers had been married for nearly 22 years when they announced, via a joint statement, that they were in the midst of divorce talks with lawyers this summer. (Twitter)

The Fishers first met in 1987 when Jimbo was attending Samford University in Birmingham, Alabama. Candi, who grew up in Alabama, is a life-long football fan who adapted to life as a coach’s wife with ease. She was regularly spotted at Florida State games and frequently took to Twitter to show her support for the Seminoles.

While Jimbo has been focused on his coaching career, Candi worked as a middle and high school English teacher and even began writing her own murder-mystery novel in 2015.

3. Fisher’s Son Ethan Was Diagnosed With Fanconi Anemia in 2010

Candi and Jimbo Fisher have two sons, Trey and Ethan. The family was dealt a scary blow in 2011 however, when it was discovered that Ethan had been diagnosed with Fanconi anemia, an incurable rare blood disease that often leads to bone marrow failure and an increased risk of cancer.

Ethan was featured on College Game Day to help highlight his efforts against the disease and the Fishers founded the Kidz1stFund to help raise awareness and funding to fight FA.

Although Ethan is currently healthy and fighting the disease, Candi said that it’s a consistent challenge:

he biggest struggle for me is seeing Ethan doing so many cool things and seeing how athletic he is, and then I have that feeling in my stomach that reminds me that eventually he won’t be able to do those things. As parents we want so much for our kids and I know it has to be tough for you too. I have to remind myself that each minute we spend with him is so precious and to cherish it all and to try not to focus on the worry.

4. His Brother, Bryan, Was the Offensive Coordinator at Fairmont State University

Fisher’s younger brother, Bryan, is set to begin his second stint as a high school football coach in West Virginia this fall. (Twitter)

Much like his brother, football is in Bryan Fisher’s blood. He played tight end at Salem College and was even coached by his brother Jimbo for several seasons.

Bryan Fisher’s football career never took off as a player but he found his footing on the sidelines, first as the head coach at Robert C. Byrd High School in Clarksburg, West Virginia and then, for four seasons, as the offensive coordinator at Fairmont State University. Fisher said at the time:

I am excited for the opportunity to come to Fairmont State. I’ve known coach Lopez for years and believe in what he’s doing. I’m anxious to join the great staff there and be a part of the program.

Fisher had spent seven years as head coach at the high school level, compiling an overall record of 58-28 and leading the Flying Eagles to state playoff appearances in five of his seven seasons. He would spend four years at FSU before returning to Robert C. Byrd as the program’s offensive coordinator and recently re-named head coach.

The brothers had previously talked about the possibility of Bryan joining the staff at Florida State in 2014 but nothing ever came of the discussion after the Seminoles national championship that season.

5. Fisher’s Father Was a Coal Miner in West Virginia

Jimbo Fisher grew up in Clarksburg, West Virginia and each summer he returns home to reconnect with his blue collar roots and the values that were instilled in him by his parents.

John James, better known as Big Jim, and Gloria Fisher lived on a 300 acre spread in Clarksburg, just a few miles away from the local school. Gloria taught there for over 50 years, just recently wrapping up a career in the classroom. Big Jim, meanwhile, worked in the coal mines. He was severely injured in 1967, the week after Thanksgiving, when an explosion went off in the mine, breaking his legs, burning his face and splitting his fingers open.

Big Jim spent four months in the hospital and was never able to return to the mines. He continued to work on the family farm but never entirely recovered, suffering from black-lung disease that led to several strokes. In 1994, he died from a heart attack at the age of 62. Jimbo had just wrapped up his second season as the quarterback coach at Auburn.