Auburn at time looked unpolished but did enough to escape Atlanta with a 31-24 victory. New Auburn starting quarterback Jeremy Johnson threw three interceptions but also showed his potential at times. Louisville’s defense played well but the Cardinals offense was not able to do enough early on to allow Louisville to win the game.

Here is how Auburn won the game:

Louisville Threw an Interception on the Very First Play

Lamar Jackson lined up a few yards from center and faked the hand off to a receiver. He then rolled to his right and with pressure coming from Auburn’s defense he threw the ball wildly in the air directly to Auburn for an interception. Not exactly the way Cardinals fans wanted to start the season.

Jeremy Johnson Rushed for a Touchdown Early in the First Quarter

After the interception, Auburn drove down for a scoring drive. Johnson was 2-for-2 on the first drive for 19 yards. On the goal line he faked the handoff and ran untouched into the endzone for a touchdown.

After a great first drive, Jeremy Johnson threw an interception with a little over a minute left in the first quarter. He underthrew his receiver and a Louisville defensive back cut inside the route for the interception.

As the beginning of the second quarter, Johnson dropped back for a deep throw. He overthrew his receiver and Louisville intercepted the ball. It was his second straight interception.

Auburn Recovered a Fumble and Ran It Back for a Touchdown

Midway through the second quarter Louisville had a bad exchange on a handoff and fumbled the ball. Auburn recovered the fumble and ran it over 80 yards for a touchdown. It has been a game marked by turnovers.

Louis ran a beautiful route that faked out the Louisville corner. Johnson connected with him for the long bomb and his first touchdown pass of 2015.

Jeremy Johnson Threw His Third Interception of the Game

Johnson underthrew his receiver again and the Cardinals defense took advantage. It was the third interception of the game for Johnson. Louisville’s defense has been solid but the offense got off to a slow start.

Louisville Fought Back With a Third Quarter Touchdown

Louisville has alternated quarterbacks throughout the game. On this particular play, Lamar Jackson ran the read-option and kept the ball. He rushed into the endzone for Louisville’s touchdown.

Auburn Scored Another Touchdown in the 4th Quarter

Auburn runs the jet sweep and the play results in a touchdown for the Tigers. Despite having three turnovers the Auburn offense has bright moments throughout the game.

The Cardinals Responded With a Touchdown of Their Own

Just when Louisville looked to be out of the game, they would respond with a touchdown. The score would happen too late in the game to seriously challenge Auburn, but the Cardinals demonstrated a lot of willpower throughout the game.

Touchdown, Louisville! The Cardinals are back within seven after another Brandon Radcliffe TD run

Radcliff scored his second rushing touchdown of the game. He had 19 rushes for 81 yards for the Cardinals and was one of the bright spots for the Louisville offense.

Bobby Petrino Blew Louisville’s Final Timeout on an Untimed Down

Auburn was whistled for a penalty with just under 50 seconds remaining in the game. The clock was stopped but for some reason Louisville Head Coach Bobby Petrino called their final timeout. The move allowed Auburn to use all but three seconds left. On fourth down, Auburn simply threw the ball up in the air. 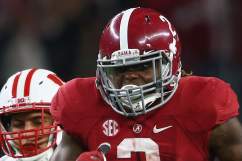