Jonathan Stewart will be the Panther’s full-time starter for the first time in his career (Getty).

It wasn’t pretty, but the W is all that matters.

The Panthers left EverBank field with their first win of the season, a 20-9 triumph over the Jacksonville Jaguars. Jacksonville held Cam Newton in check for most of the game, but turnovers and a lack of big plays were their downfall.

The game turned midway through the third quarter, right after the Panthers had punted. The Jaguars took over at their own 20, and Bortles looked to hit one of his receivers on the outside. The route was jumped by Panthers corner Josh Norman, who taunted Bortles while returning the ball into the endzone.

Carolina got the win, but it wasn’t without some form of loss. Luke Kuechly left the game shortly before halftime, after being stunned following a hit on a Jacksonville receiver. Kuechly has been diagnosed with a concussion, and he is questionable for next week against the Texans.

Jacksonville can take positives away from the game, namely the debut of T.J. Yeldon. Against a tough Panthers front, Yeldon finished with 12 carries for 51 yards, and even caught three passes. Interceptions are going to occur with a young quarterback, and the Jaguars will have to roll with Bortles’ growing pains this season. 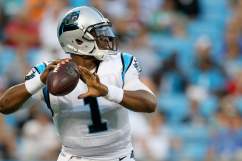 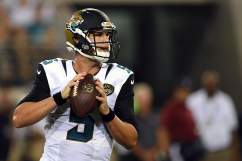 How to Watch Panthers vs. Jaguars Live Stream Online

Wow. There you have it folks.

Another pick on first down and the fat lady is singing and fans are leaving.

After a late field goal put Carolina up by two scores, the Jaguars needed to come out aggressive. Unfortunately, Blake Bortles was intercepted on the series’ first play by Thomas Davis. The game was pretty much over, but the errant throw by Bortles sealed Jacksonville’s fate.

Carolina Slowed the Game Down in the Fourth

Carolina caps off their eight minute drive with a FG. They lead 20-9 with 2:41 left to play.

After exchanging punts multiple times in the second half, Carolina put the game to bed with a grinding offensive attack. They worked the Jaguars over a 15-play, 8 minute drive, culminating in a short field goal.

Carolina Opened the 3rd With a Pick-Six

A disrespectful pick on Bortles for Josh Norman pic.twitter.com/2pTpdFiVwK

Bortles had a reasonably solid first half, and at the very least, did a good job of minimizing his mistakes. But a bad throw on the outside was seized by Josh Norman in the third, and nobody had a chance at catching him. Bortles had the curl route jumped by Norman, who raced into the end zone for a 30 yard score. Panthers extend the lead, 17-9.

To put salt in the wound, Norman pointed at Bortles en route to the endzone.

Luke Kuechly is Out With a Concussion

Luke Kuechly is the heart of the Panthers defense, but has been sidelined after a nasty collision (Getty).

Ouch… Kuechly out with a possible head/neck injury. Left the field after this play. pic.twitter.com/Z8epKNZ3Dc

In what was first considered a precautionary measure, Kuechly was taken back to the locker room early for examination. Fears were confirmed, however, as Kuechly did not return to action in the third quarter. It was revealed shortly after that Kuechly had sustained a concussion and would not return. 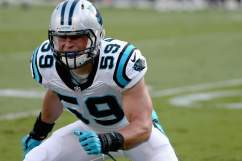 After a sloppy first half of football, the Panthers lead 10-9 in Jacksonville. Things should cahnge for the second half, however, as a key injury may play a role in the outcome of this contest.

Luke Kuechly was taken to the locker room just before halftime, after appearing stunned following a hit at midfield. Kuechly walked off under his own power, but may be kept out as a precaution. Kuechly is by far the best defensive player for Carolina, so it’ll be interesting how both teams adjust if Kuechly isn’t able to return.

Bortles to Hurns Before Halftime Helped Even the Score

Congrats Rashad Greene! 1 of the good guys in the #NFL, first TD of his career. @RG80_ many more to come! #Jags pic.twitter.com/iuQsfJAl5g

The Jaguars moved quickly in their two-minute offense, aided by catches from Rashad Greene and scrambling from Bortles. Bortles then hit Hurns for a 24-yard strike, which was originally called incomplete but was promptly reversed. With the ball at the 1-yard line and 21 seconds left, Bortles hit Greene for the first Jacksonville TD of 2015.

The First Touchdown Came Late in the 2nd Quarter

After a sloppy first half, Carolina put a drive together just before halftime. After converting a 4th and 1, Cam fired an 8-yard strike to Cotchery in the middle of the endzone. The Jacksonville defense seemed to have zoned in on Greg Olsen, leaving JC wide open down the seam.

Carolina Drove Right Down the Field on Opening Drive

After the Jaguars opened 2015 with a three-and-out, Cam Newton wasted no time driving down the field. He seemed to hit Greg Olsen for a passing TD, but the play was nullified by a penalty. Ultimately the Panthers were forced to settle for a 43-yard Graham Gano field goal.

Even without stud receiver Kelvin Benjamin, The Panthers are a tough team to scheme for. The Jaguars, aided by some new faces on defense, will have their hands full against the dual-threat capabilities of Newton. Look for the Panthers, hampered by a lack of receivers, to run a college-style rushing attack. A healthy Cam Newton should be dangerous running the option, which should open up holes for Jonathan Stewart.

For Jacksonville, football fans are eager to see the debut of rookie T.J. Yeldon. The former Alabama standout had a great training camp once declared healthy, and has been named the starter over Denard Robinson. Jacksonville has struggled to find a consistent back since the departure of Maurice Jones-Drew, so a strong performance today could be a turning point for this young team.

The Jaguars actually hold the lead in the history of this matchup. The teams have played five times since 1995, with the Jaguars winning three of those contests. They most recently met in 2011, when Carolina edged a 16-10 victory.