Scott Van Pelt made his debut on the revamped Midnight Sportscenter on Labor Day evening. ESPN has been promoting this version of SportsCenter as a new and improved version of the current product. Van Pelt was a SportsCenter anchor when the show was at its peak.

The big news leading up the debut show was the live appearance by former SportsCenter anchor Dan Patrick. Patrick left the network in 2007 and has not appeared on SportsCenter since he left. Patrick currently hosts The Dan Patrick Show and also does studio coverage on NBC’s Football Night in America on Sunday evenings.

Patrick appeared briefly in the studio with Van Pelt early on during the debut show. He wore his ESPN visitor tag during the interview. Van Pelt asked Patrick to reflect on his time on ESPN and what it felt like to move on from the company. You can view the interview in its entirety by visiting The Big Lead.

Yes, Dan Patrick left his visitor badge on during his interview. #SCSVP pic.twitter.com/igVnmwmq3l

Additionally, fans of The Dan Patrick Show know that he refers to ESPN as “the mothership”. ESPN’s Chris Fowler slyly referenced this in the promo of the show during the Ohio State and Virginia Tech game:

Chris Fowler with a "Mothership" drop when talking about DP being a guest on SVP's new show tonight pic.twitter.com/saiUOJHtdE

Van Pelt was previously part of the SVP and Russillo Show, a three-hour daily radio show that was also simulcast on a variety of ESPN networks. Fans of the show will be pleased to see some familiar parts to the Midnight SportsCenter. “Stanford” Steve, a former producer of the radio show, has made the move to SportsCenter as well. 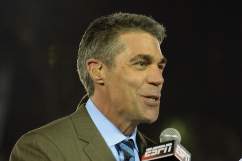 Where Is Chris Fowler?

Read More
ESPN, TV
SVP debuted his Midnight SportsCenter with a special guest appearance from former colleague Dan Patrick. Find out all the details about the first show along with the interview.