Bruce Arians has the Cardinals looking playoff-ready in October. (Getty)

Landry Jones took over for the Steelers and never looked back. (Getty)

It was a tale of two halves in Pittsburgh, as the Steelers rallied behind third-string quarterback Landry Jones for a 25-13 win over the Cardinals.

Jones entered the game in the third quarter, after the struggling Michael Vick left the game with a hamstring injury. Jones immediately led the Steelers to a short TD drive, and kept his foot on the gas throughout the half.

What Landry doesn’t have in on-field experience, he made up for it with playbook experience. Jones has been with the Steelers since being drafted in 2013, and is more familiar with the playbook than Vick. It doesn’t hurt that Jones was poised and decisive, breathing new life into the offense. He led his team to four scoring drives in the second half, including an 88-yard TD to newly-returned Martavis Bryant to put the game away.

It is unknonwn who the backup will be moving forawrd in Pittsburgh, but it’s not hard to make the case for Jones. Either way, Ben Roethlisberger wants to play next week, when the Steelers visit Kansas City. The Cardinals will return home to face the Ravens next week on Monday Night Football

For a team that averages 38 points per game heading into today, the Cardinals were stifled by the Steeler defense. Despite a late rally from Landry Jones, the Cardinals still had a chance to drive for the winning score with just over two minutes remaining.

Carson Palmer, who had been accurate in poor conditions all afternoon, sailed his most important pass of the game. Palmer was looking for John Brown in the endzone, but Steelers safety Mike Mitchell was in perfect position to make the play.

Landry Jones Changed The Game in Second Half

When Landry Jones entered for Michael Vick in the third quarter, Steelers fans didn’t know what to expect. Jones has only played in preseason, and the signing of Vick gave supporters the notion that the staff didn’t have much confidence in Jones.

Much to the surprise of everyone, Landry Jones turned the game around for the Steelers. He was poised and accurate, and led the Steelers on three second-half scoring drives.

Larry Fitzgerald has four receptions at 69 yards at the break. (Getty)

It’s been all Cardinals today in Pittsburgh.

Everywhere except the scoreboard.

Arizona is dominating the stats heading into halftime, but only hold a 10-3 lead at the break.

The Steelers have struggled against the Cardinals defense, and they got a scare right before halftime. Backup QB Michael Vick took a knee to the helmet, and was forced by Ed Hochuli to the sidelines to undergo a concussion evaluation. It was eventually ruled that Vick only had dirt in his eye, and he finished the half under center.

Fans aren’t exactly cheering for Vick’s return. The Steelers have a grand total of 1 passing yard at the half. Those looking to the future were also given bad news. Starting LT Kelvin Beachum was carted into the locker room, and he has been ruled out with a knee injury.

Well then, that looked awfully easy. Carson Palmer to Michael Floyd, from three yards out and Arizona is up 7-0 on the Steelers.

The Cardinals have struck first, thanks to savvy play from veteran QB Carson Palmer. Palmer led his offense on a 6 play, 47 yard drive, puncuated by a short strike to Michael Floyd.

The big play came three plays earlier, when Palmer bought time with his feet and eventually hit Andre Ellington, picking up 32 yards in the process. Palmer has opened the game 4/6 for 86 yards, with each completion made to a different receiver.

The first one is for Bruce Arians, who was unceremoniously forced out of Steeler Nation, only to un-retire and become one of the NFL’s best coaches. Arians brings his 4-1 Cardinals to Heinz Field this weekend, showing off the high-powered offensive scheme he took with him in 2012. The Cardinals have been electric this season, in thanks to a healthy Carson Palmer and a white-hot start from Larry Fitzgerald.

Fitzgerald, who played college ball at Pittsburgh, is also returning home. Fitzgerald played two seasons for the Panthers, before being drafted third overall by the Cardinals in the 2004 draft. Fitzgerald still has friends in Pittsburgh and is even giving them some tickets; even though he told reporters he expects them to root against his team.

On the opposite sidelines, the hosting Steelers are hoping to regain their starting quarterback in time for Sunday. Ben Roethlisberger has already begun practicing on his way back from a knee sprain, but it’s unlikely he dresses for Sunday. If that’s the case expect another start for Michael Vick, who is 1-1 in two starts this season. 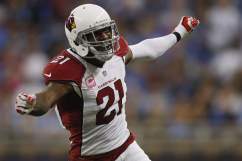