Ashley McHugh may be an MLB wife but she’s also got her own life away from the diamond. (Instagram)

Ashley McHugh has been living in a whirlwind.

The Georgia native and graphic designer has lived in 11 cities, started her own business and battled for a relationship that she never quite expected; her marriage to Houston Astros pitcher Collin McHugh.

The pair, who have known each other since they were teenagers, have gone through just about everything together. They’ve criss-crossed the country and found success through their respective and mutual failures. Now, things are looking up.

McHugh is slated to get the start for the Astros in the first game of the ALDS on Thursday night and you can expect that Ashley will be there, supporting, as usual. Here’s what you need to know about Ashley and her life away from the diamond:

1. Ashley & Collin Met When They Were Seniors in High School

When she was a senior in high school, the future Mrs. McHugh opted to switch schools. She moved from public school to a private, Christian high school in Atlanta and after a discussion with her parents, and a decision to pay half of her tuition, Ashley was walking through different hallways for her final year in high school.

It worked out pretty well. That was where she first met Colin McHugh. In a blog post on The Big Fake Wedding, Ashley described her first impression on the eventual MLB pitcher:

Collin was on a path he had been on his whole life: cute, friendly, talented, musical, athletic and an effortless (almost accidental) leader. He’s one of those guys I thought only rode around in Jeeps with pretty high school girls in cheesy high school movies. He was the popular-but-sensitive Zack Siler and I was awkward-art-freak Laney Boggs. To be clear: I thought he was faking it. I really thought he was a joke. I told him so, very frankly, on a few occasions. I took myself very seriously. I wore black. I made paintings. I listened to Bright Eyes, for god’s sake (read: I was insufferable). Of course, I had an embarrassingly secret crush on him.

2. They Were Married When They Were Just 22 Years Old

Collin and Ashley became Mr. and Mrs. at the young age of 22. (Instagram)

It all happened very quickly for Ashley and Collin.

After that initial Facebook message the pair went on their first date, then they decided to be in a relationship. According to Ashley, a month after that date she told her best friend “I thought I could marry him. A month after that we said, ‘I love you.'”

As the story goes, Collin proposed in the middle of a highway and Ashley only accepted after he asked her “to be his Beyonce.” The pair were married on October 3rd when they were both 22 years old and have been together through MLB drafts, trades, moves to the minors and, now, the postseason.

3. Ashley Got Her BFA at the University of Georgia

Ashley graduated from the University of Georgia after growing up in Atlanta. (Instagram)

Ashley, better known by her friends and family as “Buzzy,” was born in Denver Colorado before moving with her family to Atlanta, Georgia.

After graduating from high school – where she met her eventual husband – Ashley completed her BFA at the University of Georgia with a degree in graphic design and a “unique emphasis” on Fabric and Textiles. 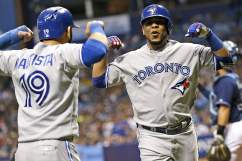 4. She Runs Her Own Print & Calligraphy Business

Ashley regularly runs her own calligraphy workshops, especially now that she’s opened her own studio in Atlanta. (Instagram)

For the past six years Ashley has owned and operated her own calligraphy, print and graphic business in Atlanta, Georgia; Ashley Buzzy Lettering and Press. The company regularly works with weddings and events providing items like invitations and menus for important days.

Ashley also stages her own calligraphy workshops around the country and appears in several of the country’s biggest cities to show off the art that is associated with printmaking. The company also offers an online workshop with nine different calligraphers showcasing their talents.

The business also recently established its first brick and mortar store, Press Shop, which is open on Monday, Wednesday and Friday.

5. Ashley Also Runs Her Own Blog Detailing Her Life

Ashley is a frequent update on her company’s blog, sharing the ins-and-outs of her life and business. (Instagram)

When she isn’t busy criss-crossing the country for her own business or her husband’s pitching career, Ashley is detailing the finer points of her life on her own blog. She regularly discusses the ups-and-downs of running and owning a business and the trials and tribulations of working on, an occasionally, long distance marriage.

The most important thing for Ashley, as she pointed out in one of her most recent posts, is to be open and ready for just about anything. She wrote:

I am an honest, open person. I strive to be honest about the struggles of my lifestyle and I enjoy hearing other people’s stories. I know that openness can be rare – and especially in some industries it can feel like people are so closed off (or competitive), it’s impossible to just make a genuine connection. I don’t want to be that way – I like connections.

Ashley considers herself a generally creative person but she isn’t only wrapped up in calligraphy. She also regularly participates in utkatsana hot yoga, cooking and knitting. She’s also “racking up some serious Southwest Rapid Rewards Points” in order to take in all of her husband’s on-mound starts.