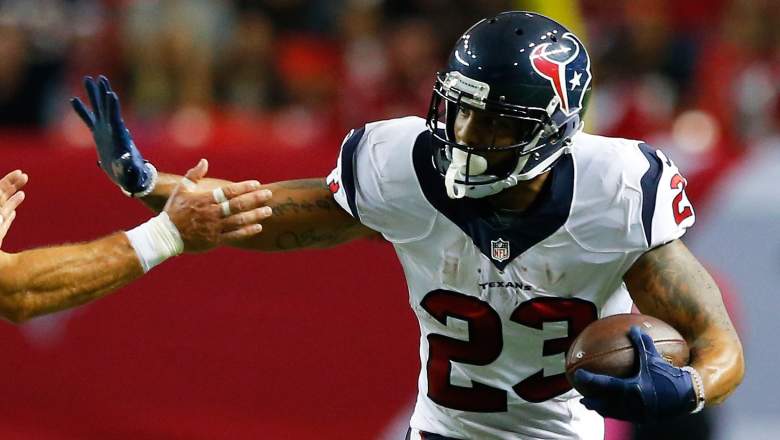 Arian Foster of the Texans should resume his role as the team’s starting running back in Week 5. (Getty)

Before getting to the Week 5 rankings, let’s take a look at some of the more disappointing running backs over the first quarter of the season.

Are the following players worth holding onto? Or are they good buy-low candidates?

C.J. Anderson, Broncos — Denver coach Gary Kubiak has said Ronnie Hillman deserves more touches. I couldn’t agree more. The Broncos are looking for a spark and Hillman — not Anderson — is giving it to them. Right now I’d rather have Hillman on my squad.

Jeremy Hill, Bengals — Hill has 5 touchdowns, but is averaging just 40 yards per game on the ground. Giovani Bernard is averaging 74. But the fact Hill is getting the goal line carries tells me you need to hold on to him as the Bengals are scoring in bunches.

Marshawn Lynch, Seahawks — It’s only a matter of time before Lynch gets going. He does have some miles on those tires and his offensive line isn’t playing well, but the Seahawks’ offense will get better. Beast Mode is a great buy-low candidate.

DeMarco Murray, Eagles — Murray can’t get worse. I mean, he’s averaging 15 rushing yards per game. I have no doubt the Eagles are going to begin feeding him more. Murray is a very good; he’ll start producing.

Here are my Week 5 running back rankings: