Experts and insiders mostly agree on who will emerge victorious when Gennady “GGG” Golovkin and David Lemieux meet in Saturday’s melee in the Big Apple. (Getty)

With only days to go before Gennady ‘GGG’ Golovkin and David Lemieux’s highly anticipated middleweight world championship unification bout at Madison Square Gardens, we survey the boxing landscape to gauge how writers and insiders are calling the fight.

“October 17th will be one for the ages,” said Oscar De La Hoya during a recent media conference call. “It will be exciting, it will be historical. Champion versus champion.”

Kazakh slugger ‘GGG’ Golovkin (33-0, 30 KOs) enters the ring this weekend attempting to solidify his status as the man to beat in the middleweight division when he puts his unblemished record on the line against Canadian knockout artist David Lemieux (34-2, 31 KOs). The scheduled 12-rounder, taking place on Saturday in New York City, will be carried live by HBO Pay-Per-View starting at at 9 p.m. ET / 6 p.m.

Click here for the details and preview you need for the big fight, or read on for your expert predictions:

Niall Doran editor of Boxing News and Views tells us:

GGG vs Lemieux could make for really gruesome viewing as long as it lasts. Instinctively, I think Lemieux will know in his heart of hearts that there’s no real value in trying to outbox GGG over the duration. As a consequence of this, you just know the fans are going to be the real winners of what will ensue. This is by far the most dangerous fight of GGG’s career thus far, and Lemieux might be inspired to go for broke early on, and try to nail Golovkin in the early rounds. I think GGG will be ready for this however, and once he gets through this early barrage, will wear a very brave David Lemieux down and eventually stop him late on. Potentially a fight for the ages.

I think this fight is huge for the sport of boxing because it will feature two action-fighters going at it and it’s almost guaranteed to bring us a lot of excitement. I honestly believe that during and after this fight, because of the action, boxing will see a resurgence and finally usher in the NEW fighters to watch and more importantly, follow pro boxing again.

With that said, I think Lemieux will come in in shape, and will want to do what he does best. Apply pressure and try to use his size, strength and youth advantages to catch GGG early and grab an upset win.

HOWEVER, GGG is one of the best the sport has to offer. No one in boxing controls the ring the way GGG does. Add to that his tremendous punching power and the fact his boxing skill is extremely under-rated, I think he will prove to be too much for the very game David Lemieux.

My official pick for this fight is for GGG to stop Lemieux in the middle to early later rounds. This fight will NOT go ten rounds. GGG by TKO or KO.

Gennady Golovkin will win by knockout. If this fight goes the distance, it’s because both fighters feel the power of the other very early and adjust to be a bit more cautious. But that won’t happen. Look at their records. Someone is leaving this ring upright and with another belt, the other will be in need of some assistance. If Lemieux is able to get inside I think the fight gets very competitive, but if Golovkin can dictate the rhythm and range of the fight, as he often does, he will wear him down at range and end it within the distance.

RINGTV.COM editor Doug Fischer writes in one of his Mailbags:

I expect Golovkin to be careful (but not reserved or intimidated) in the early rounds. I think he’ll look to establish his jab while looking for counter-punch opportunities (such as a compact hook while ducking or blocking one of Lemieux’s wider hooks with his right glove). If one of these punches lands between Lemieux’s power volleys and hurts the Montreal native in the first couple of rounds, I can see GGG going for the kill early. But if Lemmy’s chin holds out (and it might – I didn’t notice him wobbled at all against N’Dam), I don’t think Golovkin will have any problem at all with giving his fellow puncher what country folks from Southern Missouri call a “slow bleed.”

Lemieux is in a different class than Monroe Jr., but the result will likely be the same. Golovkin will be ready to make a statement in his first time fighting in a PPV main event, showing the world that he can also dominate the best that his weight class has to offer. Golovkin by TKO.

I really think Triple G is going to cut down the ring. He’s gonna be in great shape. He knows this is his opportunity to be on top and to be the superstar that everybody wants him to be. I think Lemieux might not even go a couple of rounds, maybe 2 or 3 rounds. Maybe.

Sport betting tip site Lootmeister goes out on a limb with its pick:

This has the looks of a shootout and a violent one at that. Lemieux may in fact be out of his element, as is often the case when facing 20/1 favorites. But with GGG having never really beaten anyone that great, combined with Lemieux’s explosive potential, a whirl on Lemieux at a big underdog number seems like a good play. Loot’s Pick to Win the Fight: I’m betting on David Lemieux.

Golovkin over Lemieux, KO round 7.

Jake Emen of ProBoxingFans.com predicts in his article:

The real question will be how [Lemieux] stands up to Golovkin’s power. Lemieux is a different fighter than he was in 2011, but he’s been stopped before, and when Golovkin smells blood he goes for the kill and gets it. Twenty straight times. Unfortunately for Lemieux, this will mark 21. He’ll make a go of things early but in the end he’ll be the first to feel the punishment, and Golovkin will continue breaking him down until the referee or corner halts the action. Golovkin TKO8 Lemieux

It’s an easy fight for Golovkin. Every fighter is dangerous, but Golovkin is too much boxer for Lemieux. I think after one or two rounds Golovkin wins.”

From Round By Round Boxing, Brent Herrin predicts in his post:

Golovkin and Lemieux both have crowd-pleasing styles, which would guarantee no shortage of fireworks. Lemieux likes to press the action, get in range and unload his arsenal of stunning power shots. Golovkin is more of a calculating predator that likes to stalk his prey before dropping the hammer on them…It will be nothing short of a valiant effort by Lemieux, but he doesn’t have the power nor the chin to compete with Golovkin.

Well, folks, there you have it. An exciting night for sure, but the experts have spoken and it looks like GGG by a landslide.

As for me, I agree with the general consensus that GGG will ultimately retain his perfect record on Saturday, but I think that we might be underestimating what Lemieux brings to the table and he may ask some tough questions of the mighty Golovkin, especially early on in the fight. I see Lemieux coming out strong at the bell, trying to pressuring GGG on to his back foot, and looking for an early end to the fight. But Golovkin’s refined boxing skills, timing, and speed advantage will temper the hot brawler while GGG racks up the punishment on his way to late-round stoppage. Read my preview of the fight here by clicking here.

How do you see the contest going down? Chime in with your prediction in the comment section below. 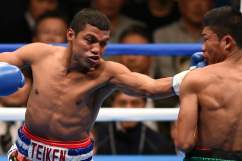 Read More
Boxing
With only days to go before GGG Golovkin and Lemieux face off in a middleweight championship unification bout, we gauge how insiders are calling the fight.