This is the “Marlins Man”, Miami lawyer Laurence Leavy, during Game 1 of the World Series. Find out more about the Miami lawyer here (Twitter-@marlins_man)

If you watch a major sporting event, you know who Laurence Leavy is; maybe not by name, but you know him. He is the fan who is on the sideline at NBA games or directly behind home plate at MLB games. He is the “Marlins Man”. Leavy is a lawyer from Miami that specializes in labor law and is addicted to attending sporting events. A serious life event led to Leavy’s devotion to watching games up close and personal, giving him a first row look at major games.

Find out more about the man in the bright orange Marlins jersey here:

Why Does the “Marlins Man” Do What He Does?

The Marlins Man was just Laurence Leavy in the 1990s, the owner of a Broward County, Florida law firm with 37 employees, specializing in labor law and owning multiple season tickets to local teams: 12 to the Miami Dolphins, 12 to the University of Miami Hurricanes, two to the then-Florida Marlins and Miami Heat.

Leavy was quoted in the Sun-Sentinel as saying:

“I was spending between $200,000 and $300,000 on season tickets for clients,” he said. “It helped me build my practice. It was great in the ’90s when Pat Riley was the Heat’s coach, Jimmy Johnson the Dolphins coach, [Jim] Leyland the Marlins coach and [Doug MacLean] the Panthers coach.”

As the Marlins and Florida Panthers floudered, people did not want to get free tickets to games.

Then he was diagnosed with liver cancer. It turned out to be kidney stones and an enlarged blood mass on his liver. But he examined his life. He attended big sporting events for years, but it was not fun for him.

“I used to say, ‘One day I’ll do this, one day I’ll do that,'” he said. “I thought one day I’d find the perfect wife who didn’t want to do anything but go to sporting events, but that never happened. I just decided I’d better make ‘one day’ today.”

What Does Does He Get Out of Having Those Tickets

His health scare made him not only go to these games, but also to take people who might not be able to attend, free of charge, for even more fun. There are many stories of Leavy taking his new friends and fans to games. Some stories are those of Jon Deller, 63, of Billings, Mont., who Leavy took to the All-Star Game in Cincinnati or Alma Serrano of Los Angeles, who he took, with 23 others, to a Los Angeles Dodgers game and gave her an autographed bat of her favorite player, Christian Yelich.

The biggest thing he wants to create is the “pay-it-forward” mentality; from the Sun-Sentinel:

Every fan he invites to a game must do something nice to a stranger. Pruett? [referring to Dustin Pruett who he brought to a St. Louis Cardinals game] He bought two beers for fans behind him in line. “It’s a small thing, but it was something,” he said.

Leavy loves being very generous with his tickets and love of sports:

“As of this Sunday I have brought 704 people since the beginning of the year who sat in the best seats you can get,” Leavy said. “I wish I had 10,000 more tickets I could give.”

How Does Leavy Keep A Job

He performs several billable hours a day from hotel rooms. He runs the law firm from the front row. He often takes employees to games, too, such as the two dozen he took to the Oregon-Florida State national semifinal at the Rose Bowl in Pasadena.

top 5 reasons why @Marlins_Man on the phone. (plus in baseball the only action is when pitch is coming) pic.twitter.com/MLoeOF5mP9

He makes sure that his fans know where he will be (follow him @marlins_man and Laurence Leavy on Instagram):

my august traveling schedule so far

He loves spending time with the fans:

@Marlins_Man stopped by the office today. How cool is that? Super nice guy. Has done a lot for KC. pic.twitter.com/I33llCxuD7

I love you for this. your mom is amazing. we all love you abby https://t.co/K2HShToFzn

I love Jason. he invited us into his VIP suite and treated us like family. what an amazing guy https://t.co/qExHDTLeaB

He also runs into a lot of celebrities:

look who @marlins_man met last night. Hall of Fame player, so he says. He's named after street or something. Some controversy years ago over a bat or something. JUST KIDDING…. George Brett, retired 3rd baseman for the Royals. honored to see such a real living legend

SEX AND THE CITI FIELD!!!

At the end of the day, he really just cares about good causes:

it's for the KC fireman who died last week and I am trying to raise money for their families https://t.co/DvSyYlLG1R 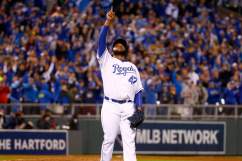