Often when athletes become major superstars, they forget about where they came from. The opposite is true for Ronda Rousey.

As Rousey has skyrocketed in popularity and become the face of UFC, she has remained incredibly down to earth and true to her values. Family, in particular, is of extreme importance to Rousey, and that’s evident in her relationship with her younger sister, Julia De Mars.

Here’s a look at everything you need to know about the latter:

Who better to play a young Ronda than, well, pretty much a young Ronda? Julia, 17, bares a pretty striking resemblance to her older sister, which allowed her to star in the above promo for UFC 193.

“Amazing UFC 193 promo,” wrote Ronda. “My little sister even plays the yonger me in it!!” 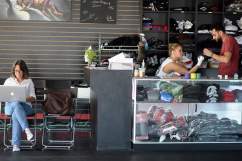 2. Her Mother Is a World Judo Champion

Julia’s mother, AnnMaria De Mars, became the first American woman to ever capture gold at the World Judo Championships, when she won the 56kg division during the 1984 championships in Vienna. A sixth-degree blackbelt, she also has a Continental Championships gold medal and four other gold medals as various international championships.

Away from the sport, she has been just as impressive. In addition to being a loving and caring mother, De Mars has a Ph.D in Educational Psychology, she is the CEO of 7 Generation Games, she is a statistical consultant and she was named to Forbes‘ “40 Women to Watch Over 40” list in 2013.

3. She Plays Soccer in High School

Considering the vast success of her mother and older sister, Julia would have been remiss to not at least give judo a shot. She did, but she has been more drawn to soccer.

A senior at Villanova Preparatory School in Ojai, California, Julia plays at both the school and club level. In March, her mother wrote about Julia’s long list of accomplishments in her blog:

This week, she was accepted on a club soccer team, turned 17 years old, took her SAT and was awarded a scholarship (again) for her fourth and final year of a college prep school that she will appreciate much more once she actually goes to college.

Ronda, who you may have heard of, is pretty good at the whole UFC thing. Maria Burns-Ortiz, the oldest sibling, is a journalist who has written for ESPN and FOX Sports Latino and co-wrote “My Fight / Your Fight,” an autobiography about Ronda. Jennifer is the second-oldest.

5. Ronda Has Talked About Being a Role Model for Julia

Ronda and Julia about 10 years ago. (Instagram/rondarousey)

Rousey has become a role model to thousands of individuals worldwide, but none more important than Julia, who is 11 years younger than her. She discussed what that’s like: 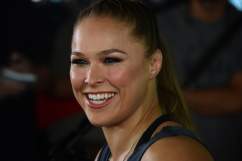