Williams, a ten-year veteran, will be the Steelers starting running back moving forward. (Getty)

The injury bug has bit the Steelers this season. Hard.

After QB Ben Roethlisberger made his return to the Steelers lineup following a four-game absence, workhorse RB Le’Veon Bell went down holding his knee after being tackles along the sidelines.

The Steelers offense was healthy for two quarters.

Bell was carted off to the locker room, and it doesn’t look good for Pittsburgh’s top back. Bell missed the first two games of the season due to suspension, but is still ranked fifth in the NFL in rushing yards.

During his two-game suspension, the Steelers depended upon veteran DeAngelo Williams to lead the backfield. He did, rushing for 204 yards and three touchdowns to start the season. Despite his early success, Williams has carried the ball just 13 times in five games since Bell’s return.

That’s changing now, and Williams should once again be the lead back in Pittsburgh. The former Carolina Panther will get the majority of touches going forward, and will be a big part of one of the NFL’s most dynamic offenses. The other Steeler running backs are Dri Archer, who is more of a Percy Harvin-type, and former Jaguar Jordan Todman, who has only dressed for three games in 2015 and does not have a carry.

Moving forward, Williams will be a must-own in all fantasy leagues. He could be an RB2 every week, and is one of a few backs in the NFL that will get a large majority of his team’s rushing attempts. 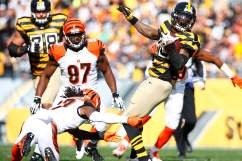