Le’Veon Bell stayed on the ground after a hit on the Pittsburgh sideline. (Getty)

Not pretty. Don't watch the replay of that last play. Le'Veon Bell being helped over to the trainer's table now.

Running back Le’Veon Bell is on the ground, after taking a low hit on the sidelines in the second quarter against Cincinnati. Despite missing the first two games of the season due to suspension, Bell is fifth in the NFL in rushing.

That does not look good for Le'Veon Bell, knee bent. Reggie Nelson hit Bell last year. This time, Burfict on a clean tackle.

The loss could be devastating for the Steelers, who are just getting back Ben Roethlisberger after he sat the previous four games.

Bell torched the Bengals for over 200 total yards in his first appearance against the Bengals last season, but suffered an injury in the rematch and was also injured. As you can see from the video below, it was a clean hit that unfortunately tangled Bell’s legs on the way down. In both instances, it was Bell’s right knee that was injured.

Bell was carted off the field, and is out for the rest of the day. DeAngelo Williams will fill in for Bell in the Steelers backfield. Williams played well in Bell’s absence earlier this season, including a three-touchdown performance against San Francisco.

I appreciate the concern and support from everybody who's sent me txts, tweets, phone calls, etc…I'll be okayy, love youu all! #Juice 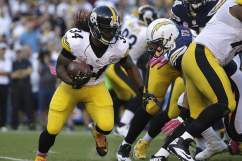