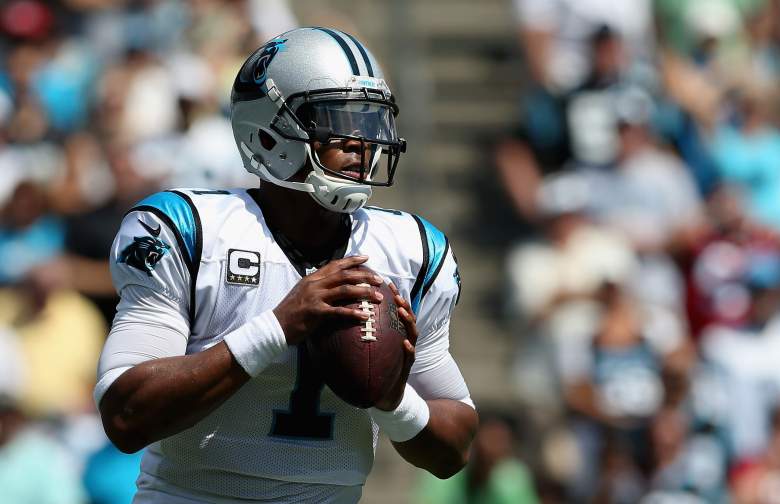 Cam Newton and the Carolina Panthers head to Texas for a Thanksgiving showdown against the Cowboys. (Getty)

The Carolina Panthers stayed perfect on the season, improving to 11-0, with a pretty convincing victory over the Dallas Cowboys on Thursday evening.

Carolina picked off Tony Romo three times – including a pair of pick-six moments – before the Cowboys Pro Bowl quarterback left the game on the final play of the third quarter with what appeared to be a re-aggravated injury to his recently-healed collarbone. Romo finished with just over 100 yards through the air.

Matt Cassel replaced Romo in the fourth quarter and threw 93 yards and the Cowboys only touchdown of the night.

But while the Panthers defense was the star of the show, Cam Newton notched another impressive performance as he continues to play MVP-caliber football. Newton finished the night with 183 passing yards, 45 rushing yards and one rushing touchdown.

Click here to check out a full box score of the game and read on for some of the night’s best moments:

Cole Beasley Notched the Cowboys’ First TD of the Night

If Cole Beasley is in your fantasy lineup, he just scored a TD. pic.twitter.com/9a127H62xs

Well, at least there’s that.

Matt Cassel got the Cowboys into the red zone and connected with Cole Beasley along the sideline for the first Dallas touchdown of the night. It’s a good thing too. Dallas had only failed to get into the end zone once before on previous Thanksgiving Day games.

Check out how the moment played out:

Oh man, Cowboys fans. It’ll be ok. Go get some more turkey. Eat some more pie. You deserve it.

Tony Romo went down on the final play of the third quarter, taking a major hit and going down on, what appeared, to be his left collarbone. Y’know the one. The one that kept him sidelined for nearly two months? Think about the pie, guys.

Here’s how the hit played out:

Matt Cassel entered the game for Romo and the Cowboys confirmed the quarterback would not return to the game.

The Cowboys defense holds on third down, is set to force another field goal and hold the Panthers offense to just three points. Then Byron Jones played like a rookie. The Dallas defender lofted himself off another teammate at the line of scrimmage on the field goal attempt, negating the field goal and keeping the Carolina drive alive with a first down.

That led to a Newton run. Watch it play out here:

He earned that dance.

Luke Kuechly has a reputation for big hits and big moments. But the Panthers linebacker can also run – and catch the football.

Kuechly recorded his first-ever NFL touchdown on Thursday night, picking off Tony Romo for Carolina’s second pick-six of the night. Check it out:

For good measure Kuechly went ahead and picked off Romo on the ensuing Dallas possession as well. Happy Thanksgiving, Panthers fans.

Well, that’s one way to get started.

Kurt Coleman read the route perfectly, stepped in front of the route and picked off Tony Romo for a Carolina Panthers defensive touchdown and an early-Thanksgiving lead. Check out the return here:

Coleman used the blocks in front of him, zig-zagged around the middle of the field and found his way into the end zone. The Panthers lead the NFL with 26 takeways and have scored league-high 97 points off turnovers. That’s pretty good, right?

Cam Newton has been unstoppable this fall.

As the Carolina Panthers keep winning (and absolutely dominating opponents) it’s become more and more obvious that Newton is not only legit, he’s the reason this team is winning. Newton has recorded a passer rating above 100 in three straight games, including a 123.3 last week after tossing a career-high five touchdown passes.

The most interesting part of this streak of success though, is that Newton hasn’t really had too many people to throw to. Injuries hurt the Panthers badly in the preseason and Newton has been forced to kind of stitch together an offense.

Still, he’s found a way to make it work, particularly with tight end Greg Olsen. The 2014 Pro Bowl’er has caught a team-best 48 passes for 722 yards and six touchdowns. Those six touchdowns lead all NFC tight ends.

If Newton and Olsen can keep that relationship going on Thanksgiving Day, there’s a good chance the Panthers get out of Texas at 11-0. 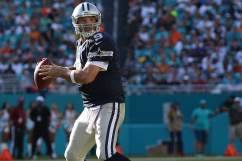