Smart and his wife will be heading back to Georgia, where they were both standout athletes. (Facebook)

Kirby Smart has been one of college football’s top coordinators for several years now. It was only a matter of time before he became a head coach at a big-name school.

He just didn’t know it’d be the perfect fit.

Smart is heading back to Georgia, where he was First-Team All-SEC in his senior season as a defensive back for the Bulldogs. Smart got his first job after college with the Georgia football program, and now he’s taking another major step as a Bulldog.

With recent news that Smart is headed to Athens, it’s time to know Smart’s wife a little better. In 2006, Smart married Mary Beth Lycett, a former athlete herself and mother of three.

Here’s what you need to know about Lycett:

1. She is a Georgia Native

Smart and Lycett were both athletes at Georgia, and were both finance majors. (Facebook)

Bulldog fans will be happy to know that when Smart comes to Athens, his wife will be coming home.

Lycett attended Morrow high school in Georgia, about 75 miles from Sanford Stadium. While at Morrow, Lycett was an outstanding student-athlete. Lycett’s family resides in Mcdonough, a small town in Henry County, Georgia.

Lycett was an Honor Roll scholar-athlete, and worked as a teacher after graduation. (Facebook)

Lycett was named Miss Georgia Basketball in her senior season, and elected to attend UGA. Four winners of the award have gone on to be WNBA first-round picks, including Maya Moore, who won it twice. 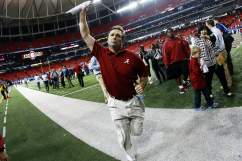 3. Lycett Was the Rock of the Georgia Women’s Basketball Team

Smart gained national recognition as a coordinator in Alabama, a role he took over in 2008. (Facebook)

Lycett spent most of her first two seasons with the Lady Bulldogs on the bench behind twin guards Coco and Kelly Miller. But in her junior and senior season, she started 51 of 61 games for UGA. During her senior season, she was named to the SEC Academic Honor Roll.

Lycett was a four-year letter winner at Georgia. She received a degree in finance.

Lycett and Smart were wed in St James Methodist Church in Athens in 2006, according to the announcement in the Athens Banner-Herald. The maid of honor was Lycett’s sister, Anne Lycett Toothaker. The reception was held at the Athens Country Club. The couple honeymooned in Jamaica.

In 2006, Smart was an assistant on Saban’s brief NFL stint with the Miami Dolphins. During that time, the couple was residing in Fort Lauderdale, Florida. While Smart was coaching, Lycett was working as a math teacher at Cooper City high school in Fort Lauderdale.

5. The Couple Have Three Children

The Smart family have three children, including twins. (Facebook)

Lycett is now seen most of the time accompanied by her three beautiful children. The oldest two, Weston and Julia, are twins. Andrew is the youngest, born in 2012.

Georgia is expected to announce the hiring of Smart early next week. Smart is replacing Mark Richt, who was the head coach at Georgia for 15 seasons.