Brooke Pumroy, featured in a YouTube clip from her days at Marquette. (YouTube/MUTV)

Brooke Pumroy is a guard for the Louisiana Tech women’s basketball team.

Tyler Summitt, the head coach at LA Tech, resigned his post abruptly Thursday and admitted to having an affair outside of his marriage.

There is widespread, but unconfirmed, speculation on Twitter and multiple websites that Summitt was having an affair with Pumroy and that Pumroy is pregnant.

Here is what you need to know about Pumroy, a 5-foot-9 guard.

She led the team with 71 3-pointers made and her .863 free throw percentage was the fifth-best in the school’s single-season history.

Pumroy set career-highs with 27 points and 6 3s in a loss to Rice.

Pumroy announced during the past season she will forego her final year of eligibility.

2. She Transferred From Marquette After Her Sophomore Season

Pumroy began her college career at Marquette for the 2012-13 season. At the time, Summitt was an assistant coach with the Golden Eagles.

She spent two years there and transferred after her sophomore year, along with teammate Ashley Santos, after Summitt was hired as Louisiana Tech’s head coach.

Pumroy basically started the day she stepped on the Marquette campus, getting the starting nod at point guard in 63 of her 64 games there.

As a sophomore, Pumroy started all 33 games for Marquette, averaging 9.1 points, 5.2 assists and 3.2 rebounds per game.

3. Pumroy Credits Summitt for Her Successful Transition to the College Game

Pumroy said while she enjoyed much success at the high school and AAU level, when she got to Marquette she was kind of lost when it came to the nuances of the game.

She told latechsports.com back in August 2015:

When I got to the collegiate level it was like a big slap in the face. I was like I don’t know what any of these terms are. What is a down screen? So it took a lot of time.

Pumroy said Summitt was instrumental in teaching her those aspects of the game. From latechsports.com:

I spent so much time with Coach Tyler, like two hours a day watching and learning the vocabulary and watching other players. There was so much extra time I had to spend doing that stuff. I was literally the only point guard we had when I got there so I had to learn.

About their time at Marquette, Summitt told latechsports.com:

Brooke and I have been developing a relationship for almost four years now. The fact she had to be our starting point guard at Marquette as freshman and sophomore against top talent forced us to have a lot of 1-on-1 time learning how to handle the role.

According to Santos’ father, Jose, some of the Louisiana Tech players felt Summitt showed favoritism toward Pumroy and it divided the team months before the coach stepped down. Jose Santos told USA Today Sports in a story that Ashley brought the matter to assistant coaches, but nothing was ever done about it.

She presented to the coaches that some of the girls had confided in her that if things didn’t start to change, or some things weren’t addressed, they were not returning. They didn’t like the environment at all and they talked about leaving and that’s a fact. … I know for sure that Ashley was told there would be adjustments made and it never happened.

She (Pumroy) could mess up a million times and (Summitt) wouldn’t take her out. There were so many things where Brooke could do anything she wanted to do and still stay on the court. Brooke, she had the green light on everything.

4. She Tore Her ACL In High School

Marquette wasn’t Pumroy’s first choice out of high school. She says she was being recruited by Michigan, Michigan State, Miami, Fla., and Vanderbilt. The Lady Commodores was her No. 1 choice.

But while attending Vanderbilt’s elite camp prior to her senior year, Brooke tore her ACL. After that, Vanderbilt backed off the pursuit of the point guard by withdrawing the scholarship.

She told latechsports.com that losing that scholarship was “a blessing in disguise.”

Pumroy went on to tell the story of how she landed at Marquette:

On my way home from that camp, Marquette coach Terri Mitchell called me and said ‘We want to offer you. We usually don’t offer over the phone, but we want to offer you.’ And I said, Marquette? Where is that? So that next weekend I went up there on my crutches, and I loved it. So I committed there.

She sat out most of her high school senior season in 2012 because of the injury. 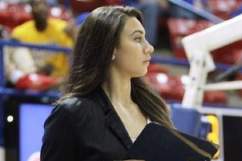 5. Pumroy Is From Ohio & Enjoys Golf

Brooke Pumroy was the starting point guard at Marquette when Tyler Summitt was an assistant there. (YouTube/MUTV)

During the summer I would go to work out then go to the driving range. I love to golf. I don’t think I’m that good. I’ll go to the Tech course and play sometimes by myself.

Pumroy is also a member of the Fellowship of Christian Athletes (FCA), telling latechsports.com:

Pumroy is originally from Fairborn, Ohio, and attended Fairborn High School, where she was named to the Dabbs Miami Valley All-Area First Team in 2011.

Her parents are Rick, who is a home inspector, and Michelle, a dental hygienist. She also has a brother, Jordan.