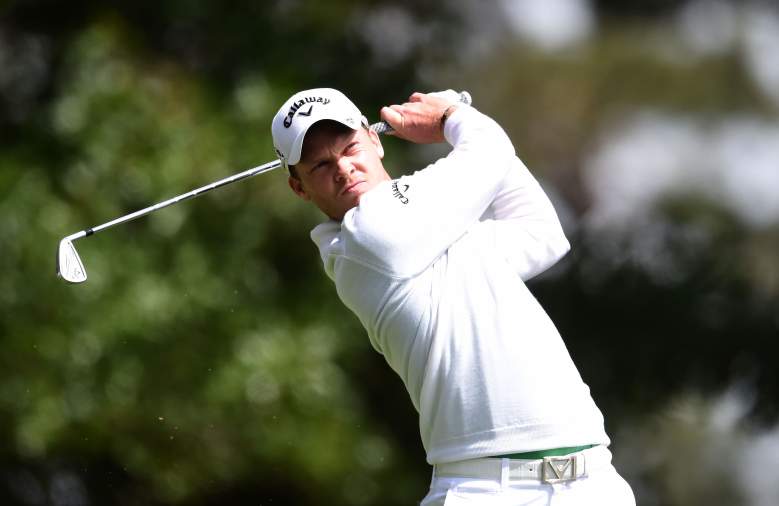 Danny Willett has a newborn baby cheering for him as he makes a run at the Masters. (Getty)

Danny Willett is making a strong run to beat Jordan Spieth on the final holes of the Masters in Augusta, Ga. He will have his family cheering him on including the newest member of the Willetts, Danny’s newborn son, Zachariah.

Willett, 28, nearly missed this year’s tournament, not wanting to miss the birth of his son. His son arrived a week before the first round and he could be on his way to winning his first major.

Nicole is her husband’s biggest supporter and gave him his greatest gift, a newborn son.

Willett and his wife Nicole tied the knot in 2013. She’s an avid supporter of her husband and even caddied for him last year at The Masters’ Par 3 Contest. Nicole is always encouraging him on Twitter and she even made him a special Valentine’s Day dinner this year.

2. Son’s Due Date Was April 10, the Final Round of The Masters

Willett considered skipping the Masters if his wife didn’t give birth by the tournament. Her due date was April 10, but Danny’s agent, Chubby Chandler, confirmed that she was scheduled to have a C-section the last week of March.

They welcomed their son Zachariah James Willett on March 30. It’s the first child for both parents. The little boy joins his canine brother, Spike the Pug.

3. Willett Called His Wife Via Facetime Moments Before He Officially Won

First thing you do as #Masters champion?

Facetime your loved ones

Willett called his wife back in England moments before he sealed his Masters win when Jordan Spieth missed a crucial putt on 17. The cameras caught the golfer trying to Facetime with Nicole at 6:45 p.m., who was five hours ahead across the pond.

When Willett secured the win, his caddy, Jonathan Smart, bear tackled him on the couch in the clubhouse. He also celebrated with Chandler and other members of his team.

4. He’s the Son of a Preacher Man and a Mathematician

Willett grew up in South Yorkshire, England. His father is a Church of England vicar (a type of parish priest). Over the years, the golfer has gotten used to the moniker, “the son of a preacher,” like the Dusty Springfield song.

“No, I’m not fed up of it. He’s retiring in a couple of years anyway so you’ll all have to stop it then,” Willett told The Daily Mail in 2015.

5. His Brothers Introduced Him to Golf 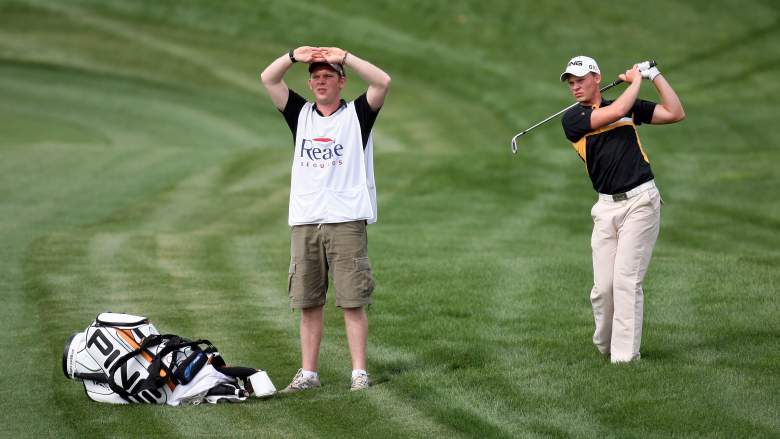 Willett’s older brother Matthew served as his caddy at the Open de Espana in 2008 in Seville, Spain. (Getty)

Willett is the third of four sons. His two older brothers who introduced him to the sport of golf. It was the only game he could ever beat them at growing up, he told the Mail on Sunday.

I had to find some sport that I could beat them in. It’s funny when golf gets its hooks into you. I would practice for hours on my own. It takes over your childhood.

His brother PJ Willett was tweeting throughout the final round of The Masters on Sunday. He joked at one point that if his brother did well he could say he bathed with a Masters champion.

If the boy does what he should, I will be able to say 'I've shared a bath with a Masters winners – brilliant#bbcgolf

Spieth, you've won one before, wind your neck in. 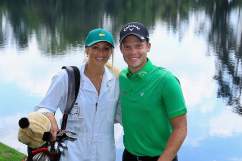 Read More
5 Fast Facts, Golf, Masters 2016
Danny Willett recently expanded his family when his wife gave birth to their first child days before the Masters began. He grew up in South Yorkshire, England with his parents and two brothers.