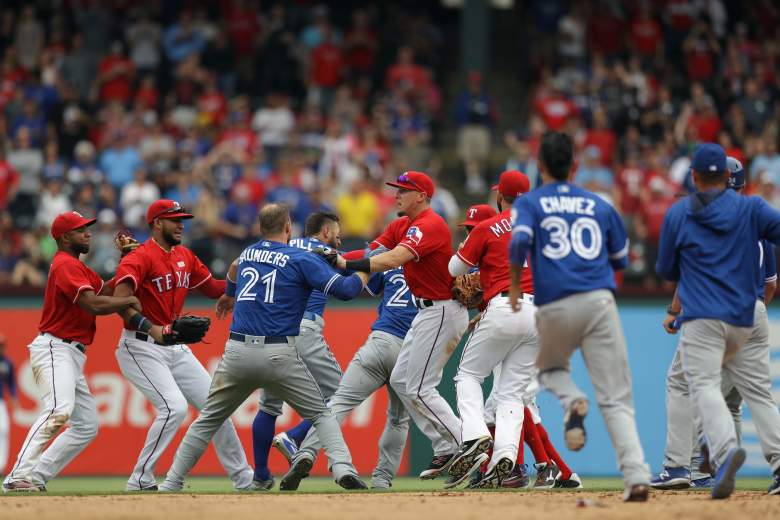 The Blue Jays and Rangers clear the bench after Toronto slugger Jose Bautista was hit with a punch by Texas infielder Rougned Odor. (Getty)

The hit ignited one of the biggest MLB brawls in recent history. Now Bautista and Odor are appealing their suspensions.

1. A Pitch by Matt Bush Sparked the Altercation, but the Heat Between Toronto & Texas Is Nothing New

Bautista was hit in the ribs with Matt Bush’s 96-mph fastball during his final at-bat of the series on May 15.

There’s speculation that the hit was the Rangers’ response to Bautista’s emphatic bat flip in the playoffs last season. After hitting a home run that effectively ended the Rangers’ season in Game 5 of the ALDS last fall, Bautista rubbed salt in the wound with an exaggerated bat flip that immediately went viral.

“I thought it was pretty cowardly of them to wait until my last at-bat to do that, in the whole series,” Bautista told reporters after the game.

As a result, Bautista took a hard slide at Odor’s legs in the eighth inning, which sparked the brawl behind the bag.

“I had a hard slide at second base. I could have injured [Odor, but] I chose not to,” Bautista told ESPN. “I tried to send a message that I didn’t appreciate getting hit [by the pitch].”

Well, Odor decided to send a message back by slugging Bautista.

2. MLB Handed Down Multiple Suspensions & Fines, Including an 8-Game Suspension for Odor 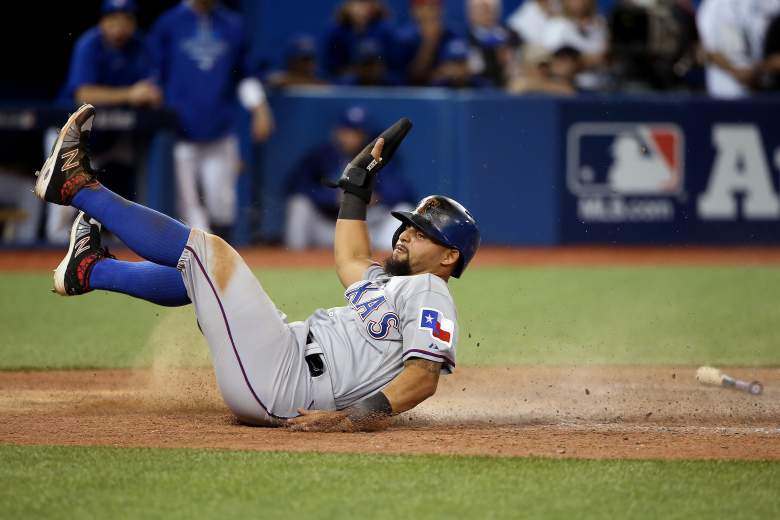 Rougned Odor slides home safely against Toronto during game two of the ALDS in 2015. (Getty)

Things escalated pretty quickly as players from both teams rushed the field. In a matter of seconds there was a bench-clearing free-for-all in center field.

According to ESPN, it took about 10 minutes for umpires to restore order, but not without consequence.

The Blue Jays’ Bautista, Jesse Chavez and Josh Donaldson, bench coach DeMarlo Hale and manager John Gibbons were all ejected along with the Rangers’ Odor and bench coach Steve Buechele.

According to MLB Network’s Jon Heyman, Odor’s suspension will be reduced from eight games to seven after his appeal to the league office.

Odor’s suspension marks the biggest penalty for a fight since Carlos Quentin was suspended for eight games in 2013 after charging the mound and tackling pitcher Zack Greinke, breaking his collarbone.

Jose Bautista appealed his one-game suspension on Thursday morning, but the Blue Jays do not know when an official ruling will be made.

3. There’s a Shirt to Commemorate Odor’s Slug & a GoFundMePage to Pay His Fine

Rangers fan Paul Ylda decided to capitalize on the hot topic. Ylda started a Teespring page selling a shirt with a red silhouette of Odor punching the jaw of Bautista’s blue silhouette.

And yes, the silhouette accurately depicts Bautista’s helmet and glasses getting knocked off his face.

The motto of Ylda’s t-shirt campaign is “make baseball fun again.” The front of the shirt says “The Punch”, which also displays the date “5/15/16”. On the back, the shirt reads “#neverforget.”

According to the Teespring page, the shirt is available for $22.99. Ylda tweeted that he will donate part of the proceeds to a non-profit based in Dallas called Do it for Durrett.

Another group of fans decided to to help Odor pay the fine the $5,000 MLB is expected to impose on him by setting up a GoFundMe page.

Rougie should have to pay something, but there’s some value as a spectator to seeing Joey Bats get punched in the face. Happy to throw in a few dollars to send Rougie and the Rangers a message. Fighting isn’t cool, but we appreciate the heart! Especially when it lands squarely on the chin of the biggest cry baby in baseball.

4. Jeff Banister Says Odor Is ‘Going to Be a Player That We’re Going to Look Back & Glorify’

Banister on Rougned Odor being called 'dirty' "this guy is the furthest from being a dirty that you could be."

Banister defended the 22-year-old second baseman who some have described as a dirty player who doesn’t respect the game. Banister previously told ESPN that Odor reminds him of himself for his intense style of play.

Here’s an excerpt from the MLB Network Radio interview on SiriusXM:

As far as Rougie is concerned, dirty player? There’s been some former players that have come out and alluded to the fact that’s how they have described him. I hear that in the media, I hear that around. This guy is the furthest from being a dirty player that you can possibly be. This is a guy that has an intensity and an edge about himself that loves to play the game for his team. He wants to do things for his team to help his team win every day.

This is going to be a player that we’re going to look back and glorify because he’s a great player at some point in his career. He’s a tremendous young player right now, talented player that if you start thinking about how would I coach a player to really give his heart and soul to every single play, still have joy in the game and be a great team player at the same point, this would be the guy that you would post up.

5. Odor Has a History of Getting Physical in Games

Last season, while at the plate against the Houston Astros, Odor exchanged words with former Houston catcher, Hank Conger that caused the benches to clear. Neither Conger nor Odor was ejected.

While playing for the Single-A Spokane Indians in 2011, Odor started a fight with the Vancouver Canadians that looks somewhat familiar.

Odor was forced out at second and took a very late slide, then appeared to make slight contact with Canadians shortstop Shane Opitz as he walked toward the dugout.

In the video above, you can see Odor confronting Opitz and throwing a punch, he then punches a second Canadians player who runs over.

According the the Spokesman-Review, Odor was suspended four games for his actions.

The New York Daily News recounted other incidents when Odor’s fiery play pushed the boundaries, including hard slides into second base that nearly injured Joe Panik of the Giants in July and Johnny Giavotella of the Angels in October.

Odor, who comes from a baseball family, has defended his actions saying he’s simply an aggressive player.

Odor learned the game at an early age from two uncles, one of whom played briefly in the MLB.

“My dad always told me and my uncles to play hard all the time, respect your teammates and play hard. That’s what I do,” Odor told ESPN . “I know I’m not a dirty player. I’m just trying to play hard and respect the other team.” 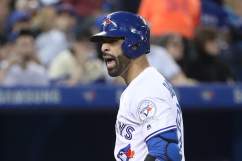