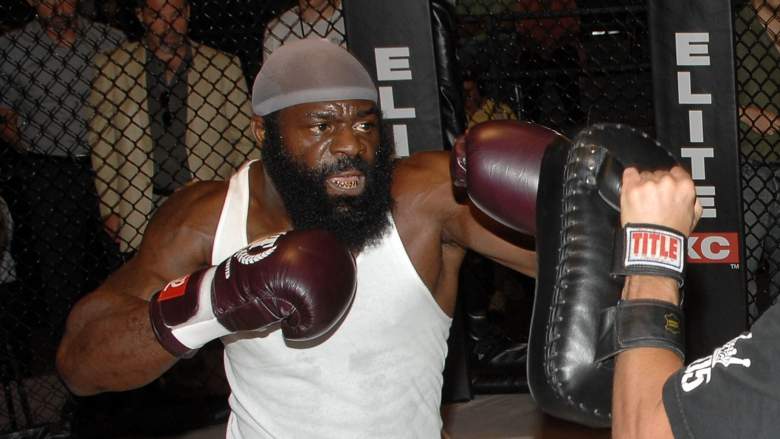 MMA fighter Kimbo Slice died Monday night after being hospitalized in Florida earlier in the day. He was 42.

We are all shocked and saddened by the devastating untimely loss of Kimbo Slice, a beloved member of the Bellator family. One of the most popular MMA fighters ever, Kimbo was a charismatic, larger-than-life personality that transcended the sport. Outside of the cage he was a friendly, gentle giant and a devoted family man. HIs loss leaves us all with extremely heavy hearts, and our thoughts and prayers are with the entire Ferguson family and all of Kimbo’s friends, fans and teammates.

Saddened and shocked at the passing of our family member Kimbo Slice. Full statement: https://t.co/TsTCujfoIK pic.twitter.com/RwxjwdAP1k

Shortly after the news broke that the fighter was in the hospital, one of Slice’s former training partners, Tyler Cook, had said Slice had already died. Cook posted photos of himself with Slice on his Facebook account with a status update reading “RIP to my man KIMBO SLICE love ya man damn.” Cook said he got a phone call and was told Slice died of heart failure. Though the cause of death has yet to be released.

Soon after Cook’s post, Twitter took off with thousands of tweets of people expressing their condolences, including ESPN Radio’s Peter Rosenberg:

Slice, a former UFC fighter, last fought on February 19, 2016, against Dhaffir “Dada 500” Harris in Bellator 149. Slice originally won by a TKO, but the decision was reversed after he tested positive for banned substances.

Slice, real name Kevin Ferguson, was born in the Bahamas, but moved to the United States as a child and grew up in Florida. He was born February 8, 1974.

As a professional boxer, Slice had a 7-0 record with six knockouts. As an MMA fighter, he was 5-2 with one no contest (his final fight).

Slice became an internet sensation in 2003 when videos of him competing in unsanctioned street fights went viral.