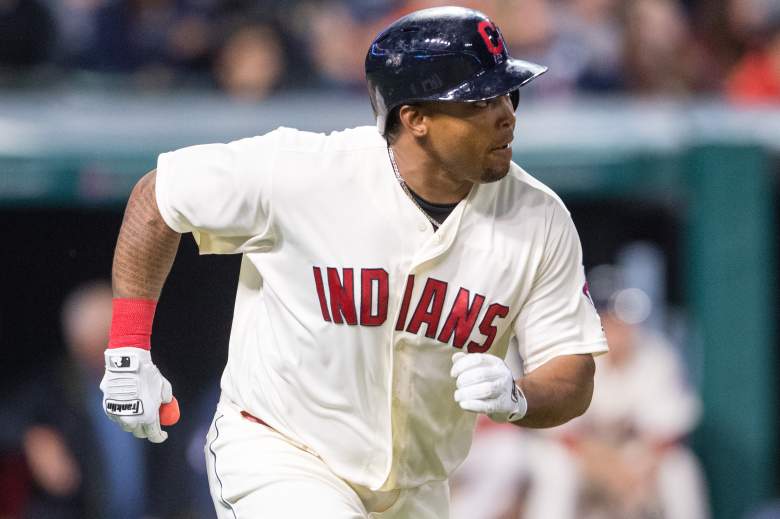 Byrd, who currently plays for the Indians, has been suspended for PEDs in the past. (Getty)

Update #2: MLB has officially suspended Marlon Byrd for 162 games. Ken Rosenthal has posted Byrd’s statement on Facebook, which can be read here.

Update: FOX Sports has tweeted that, per Ken Rosenthal, Byrd is getting suspended for 162 games. ESPN and Sports Illustrated are also reporting it.

JUST IN: the #Indians Marlon Byrd has been suspended 162 games for his 2nd PED suspension

About an hour ago Vince Grzegorek, a sports writer in Cleveland, tweeted about a potential suspension for Indians outfielder Marlon Byrd heard from a source.

Though Grzegorek admitted nothing is official yet, the tweet is making the rounds after being retweeted by major baseball writers such as Buster Olney and Ken Rosenthal. Other Cleveland beat writers have also commented on it.

Not confirmed, but also not being denied.https://t.co/qbf0cK2daZ

Another #Indians outfielder down for the count… https://t.co/NnXFy2aEih

This would not be the first time Byrd would be suspended for PEDs. In June of 2012, he was suspended 50 games while playing for the Red Sox after testing positive.

As Olney also mentioned on Twitter, this wouldn’t even be Cleveland’s first outfielder suspended for PEDs. Back in February, Abraham Almonte was suspended 80 games after testing positive for Boldenone.

For the season thus far with Cleveland, Byrd, 38, has hit .270 with 5 home runs in 34 games to the tune of a 0.9 fWAR. He’s hit 159 home runs in his career, including 77 combined in the last 4 seasons. This page will be updated when official information comes out.

Read More
Baseball, MLB, Steroids
Major baseball writers on Twitter are saying Byrd's suspension is looming, but nothing is official. This page will keep updated.