Challenger Andy Murray came out really strong to win the first set, but Djoker proved why he’s the best player in the world, winning the next three sets with an absolutely brilliant display of unbeatable tennis, prevailing 3-6, 6-1, 6-2, 6-4.

The win completes Djoker’s Career Grand Slam, putting him in an exclusive club that includes only seven other players.

A really impressive start from Murray, who earned an early break and coasted through the rest of the set, winning 6-3:

While Djokovic made an uncharacteristic 13 unforced errors in the opening set, Murray was razor sharp with everything he did:

For as good as Murray was in the opening set, Djokovic followed with an even better response, winning the second set 6-1:

He nearly put a bagel on the World No. 2, as the only game Murray won was the result of a missed drop shot by Djoker on double-break.

After hitting just eight winners and 13 unforced errors in the first set, Djokovic went for 11 and seven, respectively, in a second set that lasted a mere 33 minutes.

Another set, another display of domination by the world’s top player, who took the third set, 6-2.

Things looking up for Djokovic (not so much for Murray), as the Serb breaks for *4-1. #RG16 https://t.co/dCyt4hPtPk

Djokovic scored a pair of early breaks, and when Murray threatened to get one back, the No. 1 seed stopped four break points to keep control of the set.

The second serve was especially key in the third set, as Djoker won six of nine points in that department, while Murray, who got his first serve in just 54.2 percent of the time, won only three of 11 second serves.

With Djokovic up 5-2 and serving for the championship, Murray admirably fought back, grabbing his first break since the first set and pushing it to 5-4. He then saved a pair of championship points to force deuce on Djoker’s next service game, but the World No. 1 was simply too much.

Here’s the championship-winning point and moment:

Welcome to what has quickly transformed into the best rivalry in tennis.

Djokovic and Murray have met 10 times since the start of 2015, with three of those coming at majors and the other seven all coming at Masters 1000 events. Seven have been in a tournament final.

The World No. 1 has handled Murray pretty succinctly over that stretch, winning eight times, including last year in the French Open semifinals:

However, Murray has shown consistent improvement on clay, and that culminated in an impressive 6-3, 6-3 win over Djoker at the Rome Masters a couple weeks ago.

No matter what happens, someone will capture their first French Open title. Will Djokovic, who has been to the final at Roland Garros and lost three times, finally complete the Career Grand Slam? Or will Murray, in his first French Open final appearance, capture major title No. 3?

It’s going to be highly entertaining tennis either way. 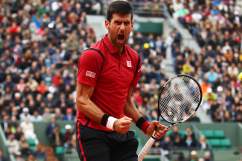