What can you say? A set piece and a penalty were USMNT’s undoing. Other than those two brief moments, USA’s defense fared reasonably well against one of the top teams on the planet.

But on the other end, there was nothing. Clint Dempsey had a few close chances, but credit to David Ospina who did his job. USA was lackluster and sloppy, and they deserved to lose. It remains to see if Klinsmann makes changes ahead of their next match against Costa Rica, but he shouldn’t nuke his lineup over a set piece and a penalty.

Not a good start, but hopefully it gets better. #USMNT #USAvCOL

USA control possession in the final minutes, but a tackle on Bradley leads to a 4-on-3 break the other way. Foul by Zusi breaks the action, but puts a wrap on this opener. It’s going to be all-or-nothing at Solider Field against Costa Rica.

Graham Zusi is USA’s final sub. They have a lot of work to do, both here and in their remaining two games of group play.

Bedoya boots a wide-open volley attempt into the stands. Another missed opportunity, this time from the Colombian-American.

Bedoya has an open volley in the box and hits it to San Diego.

USA get their third corner off of another decent opportunity, and another Dempsey near-miss. This time he just barely received the feed from Bedoya, only to dribble into Pulisic before taking an off-balance shot. 10 minutes left for USA to do something special.

Wow, even Cowherd can see it.

Don't have to be a soccer expert. We don't have enough young, dynamic attackers. Can't keep relying on @clint_dempsey

Carlos Bacca beats the USA back line and goes one-on-one with Guzan, beating the keeper but not the bar. Huge break for USA, who haven’t been getting many in their opener.

Bacca played clean through, beats Guzan but strikes the underside of the crossbar. So close to putting a fork in this. #USAvCOL

Major developments on the sidelines, as James Rodriguez was being worked on by trainers on the sidelines. As Colombia called for a sub, James sprinted back onto the field. Interesting for Colombia not just tonight, but moving forward in this tournament with their star striker.

The stint on the field didn’t last long, as James was subbed off minutes later.

Colombia get a chance to shut the door, but USA recover and deflect the ball out for the corner.

BLOCK! Yedlin denies Bacca superbly after Cuadrado was in acres of space on the right. Colombia nearly finished off. #USMNT #USAvCOL 0-2

Nagbe and Pulisic about to come on. No surprise. #USAvCOL

Here we go. 17-year-old Christian Pulisic on for Bobby Wood. Darlington Nagbe on for Jermaine Jones. Bright #USMNT futures for these two.

Dempsey gets another free kick from threatening range, but this time he makes David Ospina work. The Arsenal keeper made a well-timed diving save to push the ball away, and collected the follow-up effort from Bedoya.

Dempsey sends a dangerous free kick on goal, but Ospina makes a terrific diving save. #USAvCOL, 0-2, 63'

Give the people what they want.

Americans need a spark and might get one soon: Darlington Nagbe and Christian Pulisic now warming up. #USAvCOL #usmnt

USA corner is saved off the line!

Colombia may have a weak spot defending these corners, and they nearly got their first goal back. Instead it was a second attempt that went awry. Good aggressive movements from USA here.

CLOSE! Dempsey sends a bullet header but it is cleared off the line. Belatedly, here comes the #USMNT… #USAvCOL 0-2 #CopaAmerica

John Brooks wakes up the USA defense with a hard tackle on Juan Cuadrado, then standing over him for some extra cirricular activities. No cards were shown, but it’s nice to see some teeth from USMNT.

Is USA playing poorly? Giving up one goal on a corner and one on a penalty seems more unfortunate than anything. Subs will play an important role if they want to turn things around in the second half.

#USMNT's 2nd-half subs will be interesting.

Remember goal difference is the tiebreaker; getting blown out is bad (see Portugal at 2014 WC).

45 minutes into Copa America, and it’s not looking good for the host nation. One goal to start the half, and one tough penalty call to finish it has the Americans in an early hole. They’ve had brief moments of promise, but Colombia have shown why they’re one of the world’s most dangerous clubs. USA’s back line has performed admirably, and you could say they were playing well if not for the fact they were trailing by two goals. Any increase in tempo is only going to create more stress at the other end.

We’ll see what kind of adjustments USA make in the second half.

James sends Guzan the opposite way, and Colombia are two goals ahead in the final minutes of the first half. Devastating.

At least we have this awesome Colombian call:

Handball against the USA!

Bedoya makes contact with the ball in the box, and it’s a penalty for Colombia. James Rodriguez to the spot.

Soccer 101: keep your hands down. #USAvCOL

USA finally get Dempsey into space, but he just misses with his left foot. David Ospina barely moved for the save, clearly beaten by the bending strike. Colombia might get saved by halftime here.

Dempsey finds space for a shot just outside the 18, but it travels left of the post. #USAvCOL, 0-1, 37' pic.twitter.com/b7AmfHcbW7

Dempsey takes his time with a free kick, then boots it into the wall. USA have been gaining some semblance of control in the Colombia half, but have been unable to convert any of the long runs they keep making.

When Bradley plays "between the lines" with passes & positioning, USA will have more success going forward and get at COLOMBIA. #CopaAmerica

You know you're fast when the wind from your Flash-like sprint makes an opponent go down. USA with ANOTHER free kick, 30 out, straight on

Really nice work in attack for USA, but final shot is blocked, still a good sign, but USA attack is very slow and deliberate tonight

Jermaine Jones heads a corner over the bar. It hasn’t been a terrible response from the Americans, but their back four, playing together for the first time, is being tested early and often by Colombia. And when USA get the ball across midfield, they haven’t been able to move effectively. It doesn’t look good right now.

#USMNT just can't keep ball in the final third. Zardes guilty of easy giveaways. Colombia have sat back after the opener, dangerous on break

USA have pushed the tempo since conceding, but Colombia still look far more dangerous. A long shot from Torres forces Guzan to the ground, and Klinsmann needs to be careful to push the gas too hard against this speedy Colombia team.

Colombia effectively pressuring USA backline for long stretches of 1st half, need to kill space in front of back 4. #USAvCOL

After a Carlos Bacca run set up Colombia’s first corner, they take advantage of the opportunity. A ball into the box gets knocked down and bounces to the foot of Cristian Zapata, who zips a low shot past the outstretched Brad Guzan. Nightmare start for USA.

oh what dude no come on

Zardes down the left flank is the first deep run from USA, after Geoff Cameron set him up with some nice footwork. Zardes fed the ball to Wood in the box and there was contact, but not enough to warrant anything from the official.

Jason Derulo is off, and the teams are on. Copa America Centenario is finally here.

Lineups are up. No Besler, no Pulisic, no Nagbe for Klinsmann.

For a full look at tonight’s starting lineup check here.

Copa America is landing in the United States to celebrate 100 years of the competition, with Colombia and USA in charge of opening festivities. These two squads aren’t very familiar with each other, but both are darkhorse candidates to win it all.

USA is looking to become the fourth host nation in the last 10 editions of Copa America to reach the final, a group that includes 2015 winners Chile. Jurgen Klinsmann is aiming for a top-four finish as host nation, but USA will have a tough fight just escaping Group A.

Colombia are currently ranked third in the FIFA World Rankings, but that number doesn’t mean a ton. Los Cafeteros currently sit fifth in CONMEBOL World Cup qualifying, after poor performances against Argentina, Chile and Uruguay to close out 2015. But in James Rodriguez and Juan Cuadrado Colombia have two of the tournament’s best players, and the pair should give USA plenty of problems on the outside.

Colombia is favored slightly in this matchup, but a draw would be very beneficial to both teams. Paraguay and Costa Rica are both tough outs in Group A, so both teams may opt for the conservative approach at Levi’s Stadium. 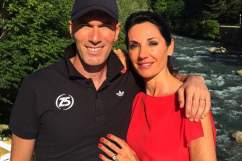