The Cleveland Cavaliers won their city its first championship in 52 years and the team couldn’t wait to get back into the locker room to celebrate. Shortly after the trophy ceremony, LeBron James and his teammates strapped on their goggles and started popping champagne bottles.

The Cavaliers defeated the Golden State Warriors in Game 7 by a score of 93 to 89 and became the first team in NBA history to come back from being down three to one in the finals. The championship win was also the first in Cavs franchise history.

Head coach Tyronn Lue stripped down to his white undershirt for his champagne shower while some of his players simply went shirtless. The other guys proudly wore their 2016 NBA championships shirts, which were quickly drenched in the bubbly.

Cavs players could not wait to get back to the locker room to celebrate. ?? https://t.co/3gMDPfK6Dl

Congratulations to the Cleveland #Cavaliers pic.twitter.com/LpfhfoyPC4

Back in Cleveland, the city shut down much of downtown for the throngs of fans that started flooding the streets earlier in the day on Sunday. As the last second ticked off the clock, the fans erupted outside the Quicken Loans Arena and all the way down East 4th Street.

The tentative date for a proper parade celebrate is scheduled for Wednesday, June 22.

Gotta throw some of that championship confetti. #nbafinals #allin216 pic.twitter.com/T69F2kUCyG 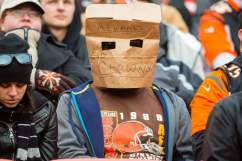 When Was the Last Time Cleveland Won a Championship?