The world’s top CrossFit athletes are competing at the sport’s main event in California– the Reebok CrossFit Games.

The games, which are in their tenth year, will take place Tuesday through Sunday at the StubHub Center.

The field has been narrowed from hundreds of thousands of athletes to 40 men, 40 women, 40 teams, 40 teenagers, and 200 masters. Each competitor qualified by participating in February’s five-week, five-workout competition called the Open and then, competing during the regionals in May.

The six-day competition consists of a broad range of functional movements. The series of physical workouts include moves such as deadlifts, pull-ups and overhead squats. However, each athlete is prepared for an element of surprise.

At each CrossFit Games, the athletes engage in a series of challenges unknown to them until right before the competition. According to the CrossFit website, “A key element to a fair test of fitness is the unknown and unknowable.”

Since its inception in 2007, the CrossFit Games have become “one of the fastest growing sports in America,” according to Forbes.

The CrossFit Games website states that in 2015, there were just more than 11,000 affiliates. Currently, they have surpassed 13,000.

The full schedule for TV and streaming is below: 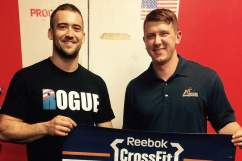 Read More
Sports
The world’s top CrossFit athletes are competing at the sport’s marquee event in California-- the Reebok CrossFit Games. Here's a look at the schedule of events and TV times.