WWE Battleground 2016 actually looks like a card worth sitting through three hours for. WWE has done an great job of building up blood feuds with intense rematches and new championship contenders.

But of course, everyone’s got their eyes on the main event. All three former members of The Shield will step into the ring to compete in a Triple Threat Match. The victor of this bout will walk into the new live RAW/SmackDown Era as the undisputed WWE Champion. Current title holder Dean Ambrose will defend his championship against Seth Rollins and Roman Reigns. Also on deck for Battleground 2016 are two big midcard championship bouts: The Miz vs. Darren Young and Rusev vs. Zach Ryder. Before we get to SummerSlam 2016, we’ll all witness those climactic battles during this July event.

We now know about all the planned bouts. So now we’re now here to go over our match predictions for WWE Battleground 2016.

Predictions & Winners: So now both these tag teams officially belong to the Blue Brand. And their first official meeting as SmackDown’s newest members takes place at Battleground. The Usos seem to be on more of a downturn lately, while Breezango have been pretty entertaining in backstage bits but less successful in the ring. This could go either way, really. We think there’s way more mileage in pushing Breezango right now, so our gut’s pulling us towards a victory for the fresher duo in this match.

Predictions & Winners: The build up towards this contest has been pretty interesting, to say the least. Xavier Woods hasn’t been his usual cheery, trombone playing self. Plus both stables engaged in a “Final Deletion”-like battle in some unknown part of town. All of this has led to the Six-Man Tag Team Match that will erupt into chaos at Battleground 2016. The New Day have been on an amazing run as the Tag Team Champions, but we’re starting to see The Wyatt Family rise back to their previous prominent position. We know, we know. Bray and his boys have a spotty track record when it comes to strong pushes. But this time, it feels a bit different. They seem even more sinister and powerful than before. The New Day looks to be splitting apart at the seams, too. Our money’s on the Wyatt Family getting the win. This loss will further break down the once strong New Day unit and lead to their eventual breakup.

Predictions & Winner: This whole “Make Darren Young Great Again” deal with Bob Backlund hasn’t made us care about the former Prime Time Player at all. He really hasn’t done much to get us invested in his new gimmick run. However, we’re always open to witnessing fresh matchups. Especially ones for titles such as the Intercontinental Championship. We’re guessing that Young and The Miz probably fought on some meaningless episode of Main Event, but we’re more intrigued in this matchup since it’s on a bigger stage. This match will be solid enough, but don’t expect a clean ending. Somehow, someway, The Miz is going to get himself disqualified (Maryse is gonna stick her pretty little head into the proceedings, of course). Darren will get the DQ win, but this feud will continue on into SummerSlam in a rematch. The stipulation? If Miz gets DQ’ed, the IC Championship will automatically change hands.

Predictions & Winner: A super pissed off and way more fierce Natalya has been fun to watch. All that smiling and waving has been ditched in favor of a more heelish style that we rarely see from Natalya. She’s put her aim dead center on her former ally, Becky Lynch. Becky’s a crowd favorite who really needs more star making performances and wins to get her higher on the Women’s Championship rankings. In this case, a hard fought match with Natalya could be just the thing to make Becky more of a worthy contender. Look for her to get the sneaky, shocking victory here. We can totally see Natalya attacking Becky after the bell and embracing her inner sore loser. At SummerSlam, Becky and Natalya will butt heads once again with tag team partners at their side.

Predictions & Winner: WWE’s treatment of Ryder is so strange. That sentiment rings especially true this year. He gets to win the multi-man IC Ladder Match at ‘Mania 32…then he loses it the next night. Now all of a sudden, he’s getting wins over guys like Sheamus and now coming out to new theme music. Is he getting (*gasp*)…A HUGE SUMMER PUSH? Maybe. What’s crazy is the fact that Rusev has finally gotten back to this stronger self now that the US Championship is in his grasp. Both Superstars are looking a lot better then they both did at the start of the year. We think WWE’s gonna pull another shocker for Ryder and his fans again. Ryder wins the US Title here, but don’t get too comfortable with his new waist addition. Ryder’s giving up that title soon after on some random episode of RAW/SmackDown. At least the Ryder win here will be fun to see.

Sasha Banks and a partner to be Named vs. Charlotte & Dana Brooke

Predictions & Winners: Look at Dana Brooke’s disloyal self. As soon as Emma took an extended break due to injury, she hopped on the Charlotte bandwagon and never looked back. Sasha Banks has had to deal with her and Charlotte for weeks now on her crusade to rip the Women’s Championship out of Charlotte’s hands. It would make a ton of sense for Emma to return and be revealed as Banks’ partner, but she’s still injured. So our next logical choice would have to be everyone’s favorite hugger from NXT. We’re gonna go out on a limb here and predict that Bayley will join forces with Banks and help take down their rivals. This of course will led into Banks finally getting her deserved title shot against Charlotte at SummerSlam 2016.

Predictions & Winner: Zayn and Owens will go down in the history books for being the most bitter rivalry to transpire within a ton of different wrestling feds. They’ve torn each other to shreds on the indies (ROH, PWG etc.) all the way onto the main stage of NXT/WWE. Their Payback 2016 match was pretty dammed good and now we’re back again for a rematch. Now if you remember, Owens was the one to take the victory during their previous bout. So it makes all the sense in the world for Zayn to get the win, right? YEP! That’s who we’re going with for this heated meeting. Zayn will win convincingly here, but we know for sure that this feud will STILL continue. Expect both guys to engage in some special stipulation match at SummerSlam. Lumberjack Match, perhaps?

Predictions & Winners: It may have been a dirty win, but AJ Styles still managed to win his first ever meeting with WWE’s poster boy. Cena hasn’t taken that loss lying down after the fact. All those group beatdowns from The Club has caused him call on the aid of the always entertaining Enzo Amore and Big Cass. The Club’s missions: BEAT UP JOHN CENA! That’s going to be way tougher to accomplish now that Cena and “the realist guys in the room” will be standing across from them. This six-man war will probably end up the MOTN list since every man in this match can go long and put on something incredible. Styles and his boys have gotten the upper hand on Cena’s crew for a good while now, so we think WWE’s going to do the predictable thing and finally give them a major loss. Cena, Enzo and Big Cass will take the big win and this will transition into Styles vs. Cena II at SummerSlam. THROW ‘EM IN A STEEL CAGE!

Predictions & Winner: We were already invested in this Triple Threat Shield matchup. But now we’re even more invested in seeing what’s going to happen due to the X factor that is Roman Reigns. Reigns has gotten suspended for a Wellness Policy, which has sullied his name during his biggest run in the company. The fans who’ve constantly booed him will rain down even more audible boos when he shows up at Battleground 2016. Reigns should go full heel and show signs of this transition during this main event. But we’re sure WWE will still try to go the forceful babyface route with him. Ambrose, Rollins and Reigns will engage in an awesome war that will be filled with crazy near falls and hardcore moments. The finish will most certainly involve Reigns getting laid down for the losing pin (it just wouldn’t be right for WWE to protect him so soon after his suspension). Ambrose is going to lay down his boy for the 1-2-3. This match is going to happen again, though. But at SummerSlam 2016, this Shield Triple Threat will fall under Elimination Rules. 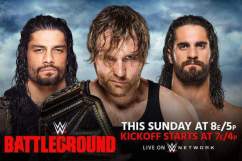 WWE Battleground Rumors & Spoilers: Who Will Win the Championship? 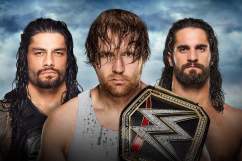 WWE Battleground 2016: The Results & Highlights You Need to Know