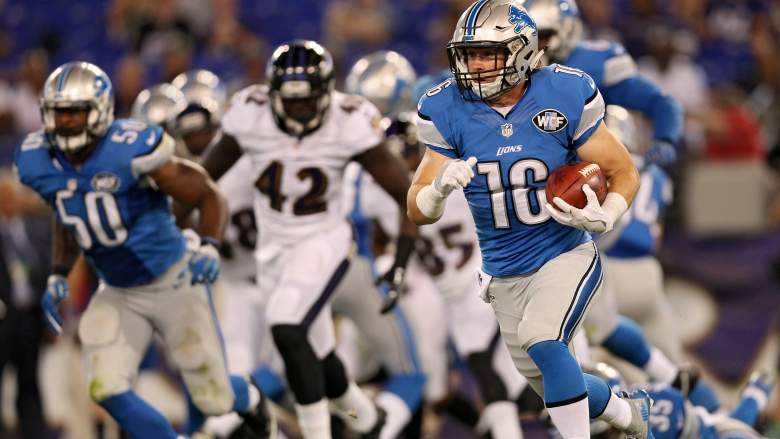 Wide receiver Corey Fuller of the Detroit Lions returns a kickoff against the Baltimore Ravens. Getty)

The kickoff is scheduled for 7:30 p.m. Eastern. The game won’t be shown on TV nationally, but will be carried by regional affiliates for both teams. You can see that list below.

While you probably aren’t going to see starters from either team on the field, Week 4 of the preseason is a huge game for those players on the bubble for the 53-man roster and practice squad. All NFL teams must set their 53-man rosters must be set by Saturday, September 3, at 4 p.m. ET.

For the Lions, one key position perhaps still up for grabs is the backup quarterback spot. Dan Orlovsky has been the No. 2 for the past two seasons and he has been working with the second unit for most of the preseason. Rookie Jake Rudock has played well with the 3s and should get plenty of time against the Bills. The job is likely Orlovsky’s, but Rudock’s play Thursday night could determine if the Lions choose to carry three quarterbacks on the regular season roster.

As for the Bills, they’ll likely give rookie quarterback Cardale Jones an extended look. Jones, out of Ohio State, missed Week 3 with an injury, but should be good to go Thursday night.

Here’s everything you need to know to watch Thursday’s action:

TV Channel: The game will be televised by regional TV affiliates.

Read More
Buffalo Bills, Detroit Lions, Football, NFL
What TV channel is the Detroit Lions vs. Buffalo Bills preseason game on? The Lions host the Bills on Thursday. Find out how to watch here.