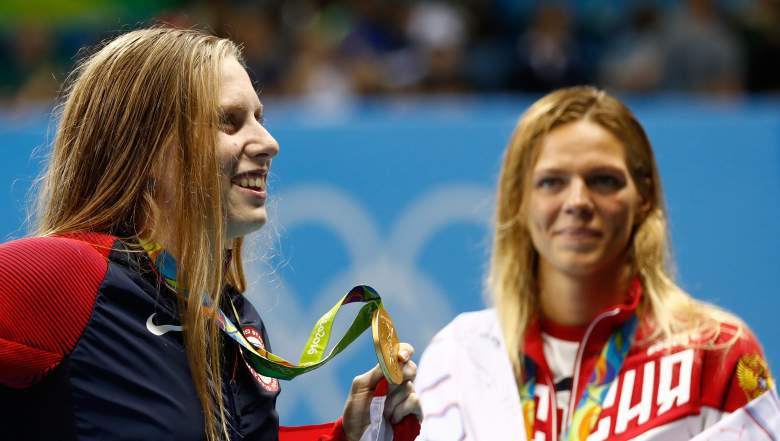 Lilly King of the United States, left, celebrates winning the gold medal in the 100-meter breaststroke as silver medalist Yulia Efimova of Russia looks on at the Rio Olympics 2016. (Getty)

That’s all changed at the Rio Olympics 2016.

And now a new rivalry has formed between the United States and Russia.

American swimmer Lilly King and Russian counterpart Yulia Emifova have garnered the headlines for their performances in the pool, but also for a brewing feud outside of the water.

Here’s what you need to know about King and Efimova:

1. They are 2 of the Best Breaststrokers in the World

King and Efimova are the two of the best breaststrokers in the world.

Efimova, 24, burst onto the scene in 2008 when she won the 50-, 100- and 200-meter races at the Short Course Swimming Championships. She also swam at the Beijing Olympics that year and has been a regular medalist in the European Championships with 6 career golds.

Her first medal in the Olympic Games came in London 2012 when she won the bronze in the 200M. She took silver in the 100 in the 2016 Rio Olympics when she was edged by King.

King, 19, hails from Evansville, Indiana, and swims for Indiana University.

The gold in 100-meter in Rio was her first international medal. 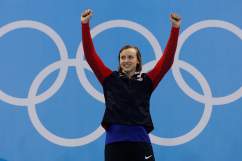 Yulia Efimova Breaststroke TechniqueSlowing down her stroke so we can see her new style. Multi-angle shots2011-03-30T07:13:59.000Z

Efimova makes waves in the pool and out of it.

Twice she has failed drug tests during her career. First in 2014 when she tested positive for DHEA, a steroid banned in professional sports. She was suspended a year from competition.

In March 2016, Efimova tested positive for meldonium, which was added to the banned substance list by the World Anti-Doping Agency (WADA) in January 2016.

Efimova was originally supposed to be banned from the Summer Games in Rio.

In fact, 6 of her Russian swim teammates were also suspended.

The International Olympic Committee (IOC) overturned the ban, citing the ruling was “unenforceable.” The IOC claimed there was no way to determine how long the drug stays in a person’s system. The meldonium ban only began in January 2016.

The ruling came just days before her events were to begin.

Julie Johnston Pictures: The Photos You Need to See

4. The Two Have Feuded During the Games

The feud seemed to begin with a simple finger wag, which appears to have become the latest victory celebration fad. Click here to watch Michael Phelps use the move.

During the 100-meter breaststroke heats, King won and used the finger wag as part of her celebration.

When it came time for the semifinals, with King watching from a TV, Efimova won her race and also used the wag in what many deemed to be a mock of King.

In a post-race interview with NBC, King said:

You wave your finger No. 1 and you’ve been caught drug cheating? I’m not a fan.

And you could say King’s hometown of Evansville, Indiana, are in the teen sensation’s corner (photo via @hpsimmons):

The things you'll see when an Olympic athlete is from Evansville pic.twitter.com/FuLwNToKVN

5. The Rivalry has Been the Talk of the Rio Games

The new “East vs. West” rivalry has been the talk of the Olympics, with King and Efimova garnering many of the headlines.

Media, fans and most of the talking heads on TV and radio have embraced the feud, with many saying it’s a great thing for the Olympics and the sport.

One thing we won’t see is King and Efimova going against each other head-to-head in Thursday night’s 200-meter breaststroke final.

While Efimova placed second in her heat, King finished seventh and will miss out on the final.

Jordan Spieth & Annie Verret: The Pictures You Need to See