The WWE clearly had big plans for Finn Balor after this year’s SummerSlam, but that all came crashing down when Balor was unexpectedly injured and had to relinquish his Universal Championship belt. Now we’re beginning to learn where Balor’s storyline was going to go.

According to the Wrestling Observer Newsletter via Wrestlezone, Finn Balor was originally going to defend the Universal Championship against Kevin Owens at the September 25th Clash of Champions pay-per-view. This would then set up a Triple Threat match between Finn Balor, Kevin Owens and Chris Jericho, which would have taken place at October’s Hell in a Cell pay-per-view.

Although it will no longer happen, this news strongly implies that Kevin Owens will become the WWE Universal Champion. Next week on Monday Night Raw, Seth Rollins, Kevin Owens, Roman Reigns and Big Cass will battle it out for the new belt. Based on this report, the WWE is clearly feeling a lot of enthusiasm for Kevin Owens, and if they wanted to give the Universal Championship to someone who’s a bit of an outsider like Balor was, Owens would be the next logical choice.

It’s unclear whether Chris Jericho could still be a part of all of this. Jericho was in contention for next week’s Universal Championship match, but he ultimately lost out on that opportunity when he was defeated by Roman Reigns. But Jericho and Owens have formed a newfound friendship, so could he perhaps get involved with helping Owens claim the championship?

Finn Balor was injured at SummerSlam during his match with Seth Rollins, specifically when Rollins threw him into the barricade. Balor recently underwent surgery, and he is expected to be out for four to six months. 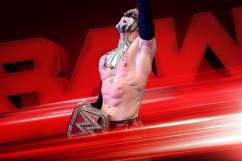 Read More
Pro Wrestling, WWE, WWE Raw
What was the original plan for Finn Balor prior to his injury at SummerSlam? Here's what we know so far.