Reactions: The Women’s Revolution continued on with this intense title match. In the early portions, both ladies made several attempts to land their big finishers. Charlotte got the best of the champion with tons of offense that targeted her back. There was a sloppy moment in the middle portions of this match that scared us a bit (it looked like Banks was gonna land awkwardly after a Gory Special attempt). But the match got back into a good flow as time went on. This match was full of some crazy moves, such as Banks throwing her knees onto Charlotte on the outside and Charlotte dropping Banks onto the top rope with a Sidewalk Slam. We had no clue that Charlotte would get her championship back so quickly. But after getting it back due to a good performance during this match, we’re perfectly fine with that result. 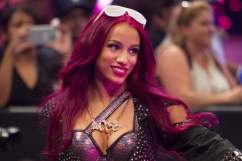 WWE SummerSlam: Why Did Sasha Banks Lose Title to Charlotte?

Reactions: Yeah so…The Miz won. Is that cause for celebration? No, not at all. But at least he and Crews put on a halfway decent match before that disappointing result. Crews was a house of fire during this title match and The Miz held up his end of the match. This honestly felt like a preview of a much more quality rematch that will take place further down the line.

Reactions: Excuse our french but…HOLY SHIT! This rematch was that much better than its predecessor. Cena and AJ are the consummate professionals who known how to perform on the biggest stages of wrestling. They did just that with this “Phenomenal” matchup. It seemed like every time Cena had AJ down for the pin, AJ blew the crowd’s mind by kicking out over and over again. Cena pulled out new moves, a dropkick, several AA’s, his STF and stiff strikes in order to get the win. But AJ fought right back with his dropkick, forearm strikes, Phenomenal Elbow, big kicks and more. The near falls here had us on the edge of our seat! Cena had the win in his grasp, but AJ did the unthinkable: survive an avalanche AA, land a Styles Clash and then a finishing Phenomenal Elbow. This was another coming out party for AJ and another fine notch onto Cena’s belt as one of the greatest of all time. Watch. This. Match!